I released this message between Lelei and Guraici islands in Indonesia. 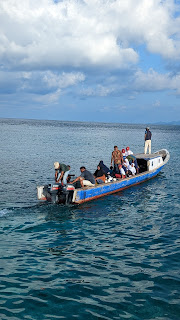 We took a small fast ferry boat out there. It had 4, 40hp 2-stroke enduro yamaha motors on it. They were tiller steered motors with tiller throttle and hand gear shifts on the side of the motors. They were then jury rigged to a steering system that allowed them to be steered with a steering wheel from above, while the throttle and gear changes had to be done by hand down below, so it took a minium of 2 people to drive it. Weird and crude, but effective... 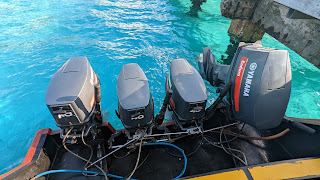 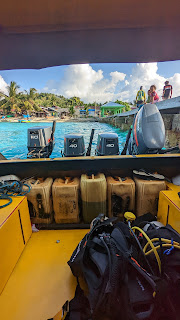 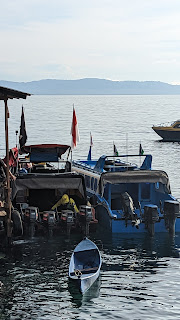 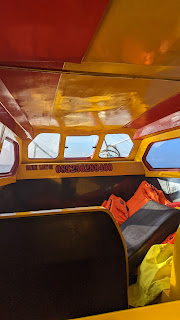 I was diving and exploring the area. 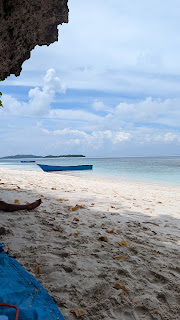 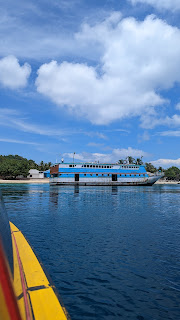 This is a very beautiful and undeveloped part of Indonesia the diving is much better than in Lombok where we live.  Hardly anyone goes here, and even though the local people do a lot of fishing the reefs seem very healthy.

I saw tons of fish and beautiful coral while free diving and scuba diving.  The water is warm and visibility is excellent.  It's far off the beaten path.

Truth: there is a big difference between 4 and 6.

You might consider staying at the home of Mr. Abjan Armmain in Lelei village.  This is where we stayed and it was clean and comfortable:

I brought my kayak back to scuba froggy where they let me store it. The sketchiest part of the trip is towing it down there on my motor scooter.

It was pretty windy with the wind from the south west so I had quite a bit of weather cocking on the way up there.

At one point two local fishermen on the shore or gesturing wildly for me to come over to them so I did. One guy kept pointing in the water eventually I figured out what he wanted  he had lost his floating bait container and his bait. It was a little dicey in the surf but I picked it up paddled over and threw it to him on the rocks. He was super happy and appreciative.

I didn't want to go too far because I knew I'd have to pedal against the wind on the way back. I found a cool little isolated cove just to myself. 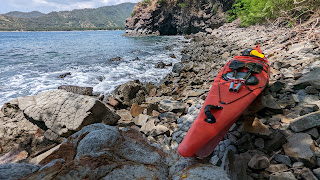 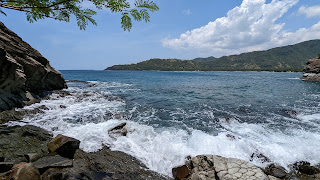 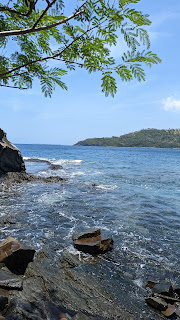 After lunch I did a bit of snorkeling and free diving there was a bit of coral but not many fish.

On the way back the boat took on a lot of water. The hatches leak and the bulkheads do as well so I ended up sitting in the water I can feel the boat getting heavier and feel the water around my legs but I made it back to the shore. I was pretty tired by the time I was done.

Posted by Tim Gamble at 9:07 PM No comments:

I was Scuba Diving off of Belongas Bay with Wild Scuba Indonesia  at the famous Magnet dive site.

This is a great company and they offer really exciting diving in big seas and current at these very special dive sites. 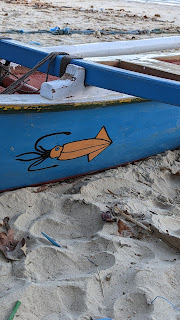 We were hoping to find the hammerhead sharks, but they weren't around. Apparently it is still a bit too warm. I dove here on the 10th and 9th. We saw lots of cool pelagic fish including Tunas and a Huge school of barracuda.

It was very rough, waves were at least 6ft trough to crest and I got a bit seasick on the ride out and especially the ride back. I could only do 2 dives and went in early because of the sea sickness. 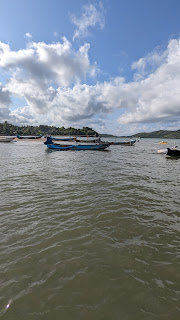 We stayed on Gili Ashran which was long drive, but it was nice to stay on these mellow islands, and the drive across the southern part of Lombok is really nice.

Paddle North along the Lombok coast from Senggigi. I have been keeping my boat at Scuba Froggy’s dive shop. This is my second paddle since we got back to Lombok, I didn’t get around to releasing a bottle on the first paddle.

See details on the Strava post of this paddle, and the earlier paddle.

There was a 10kt wind from the Southwest that increased to at least 15kts by the time I turned around.  It made for a long slow slog on the return trip, but I felt like superman on the way down.

This boat is ok, but it’s a not fast and the bulkheads and hatches leak. You get what you paid  for, and this was definitely a bargain. I did manage to roll it a few times and did a paddlefloat rescue on the previous trip, but it isn’t easy to get it to turn over.

The northbound paddle is so much prettier I kind of only want to go this way in the future.

There are some rocks that might be fun to play on in the surf, but I don’t feel good about going into them in the surf on my own. There was one cool arch that I paddled through because it was deep and mellow even on breaking waves.

I found a cool pocket beach for lunch, that was only accessible by the water, I’m sure I will be back there. The surf was dumping on the rocky beach, so as long as I didn’t go in or out on a big set it was fine. 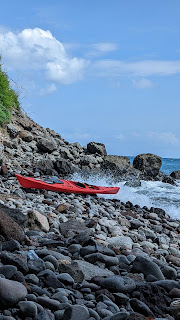 I scouted out what looks like a cool place for freediving, and maybe even scuba. We want to come back by the land. Its a rocky point, but just a few hundred meters swim if I walk down the beach to the end. 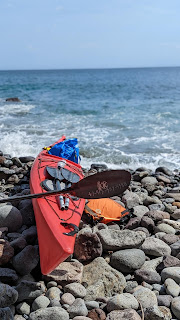 Truth: Its good to keep in touch.

Posted by Tim Gamble at 5:37 AM No comments: 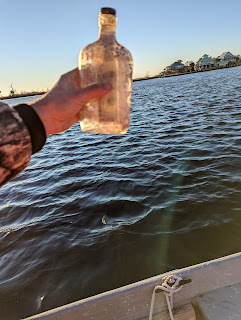 I was Hunting in the Lower Suwanee national wildlife refuge.

We didnt catch any hogs, but some other hunters in the area who arrived earlier did get some. 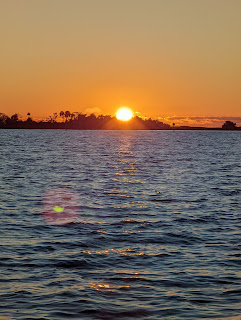 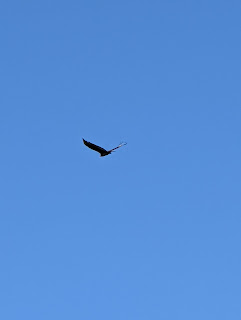 It was a cold and windy day on the Saturday. Things warmed-up and the wind died off on Sunday.

I found the old hog skull that we buried here a number of years ago. It looks very scary and weird because it became infused with roots from trees. After about 10 minutes under the hose I was able to get it back to where i could tell what it was. 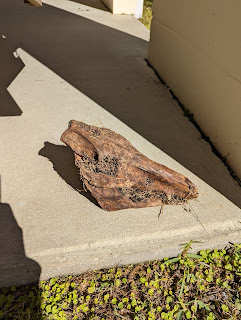 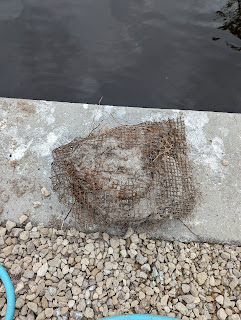 On the second day some other hunters sabotaged the airboat changing the spark plug wires around and it was looking a little dicey trying to go home in the dark. The boat kept backfiring flames out of the exhaust pipe. We figured it out and corrected it with no damage done, but WTF its public land no need to trash somebody's boat. 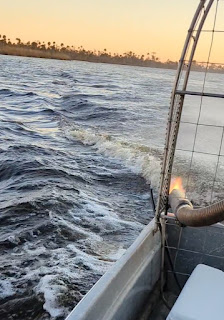 Posted by Tim Gamble at 4:55 PM No comments:

First Bottle of the New Year

I have been paddling a bit, but was too lazy to post all of them here.

I went out to Durney Key to test out my Flat Earth Kayak Sail. I finally got the rigging right and the sail worked pretty well. Im looking forward to trying it in a heavier wind. It was only about 5 to 10 knots. I definitely pushes the boat in this wind. If I dont paddle at all its about 2 knots if I paddle as well it really moved.

The sail seemed to allow sailing at 45 degrees maybe a bit more on either side of the wind. And if the day was right it would make a huge difference the amount of distance and effort.

We built some rat traps to try and reduce the rat infestation of the island, but the rats outsmarted us and took almost all the bait without catching any of them. I will upload the game camera footage if I get some good shots. 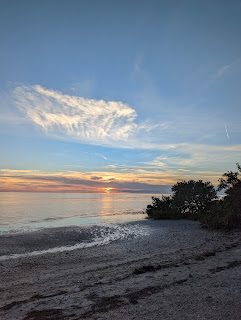 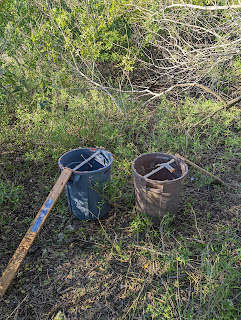