First bottle release of the new year, so I went somewhere exotic.


Released this msg in the Adaman Sea off the coast of Myanmar. Kate and I took a dive trip to Myanmar for a few days on a liveaboard dive boat.

We left from the city of Ranong  did Visa processing just over the border, then went into Myanmar for the trip.


It was kind of cool because we went to a number of places where very few people have been diving. Kate wanted to get a survey of the dive industry for her work. Right now there is just one resort that offers diving on McCloud Island and then 4 or 5 liveaboards that go from Thailand.

The  diving was good, but I am very spoiled by PNG. It wasn’t quite as a diverse as the reefs were there, and visibility was a lot less.  Lots of fish and the coral was fairly healthy, but there isn’t a lot of hard coral.

The fishing pressure is high and is growing. We  were almost always within sight of a boat or two, and saw nets and line all over the reef, as well as two giant fish traps. 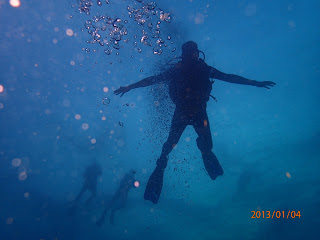 They make traps that are like a small hut 12fft x 5ft x 5ft. The two we saw underwater were old broken ones that were no longer in operation, but its kind of funky that they are so big. We saw 4 guys building one on a boat at night one night, but they were gone by the time it got light, so we didn’t see them put it into use. Much of the area we were in was supposed to be a park, but it wasn’t being enforced.


Dive boat, Aladdin Divers, was funky. On of the divemasters described it as the "last hippy boat" it was funky and party like, but also very dirty. I'm not sure if I would have made it as a hippy, I'm too worried about getting sick from unwashed hands on my food and general lack of hygiene .

Highlight of the diving were two dives where we watched cuttlefish mating. They were at it for hours and we saw them on one dive, then came back two hours and they were still going.
Kate took a couple of videos but this is by far the best one. These cuttlefish are mating and this other little fish who is battling the current comes by, but can't quite make any progress...:
Funny and Cool Video Here
It was all European people, we were the only two native English speakers, but since English was the only common language almost everybody spoke it fluently so it was easy for us to get around, and communicate with the staff Germans, the crew Thai, the other customers German, Dutch, French, Swiss, Austrian.

We had a few more days in Thailand, Ranong and then Bangkok before I head to London for work and Kate goes off to Myanmar for field work.

Truth: Each year is different.
Posted by Tim Gamble at 1:38 PM 1 comment: