I went along with Kate to a place on the PNG mainland near the city of Lae called Kamiali a wildlife management area. She had to meet a researcher who was working there, and we had heard so many terrible things about Lae I wanted to see it for myself what all the hubbub, or was the ewwweee?, was about. 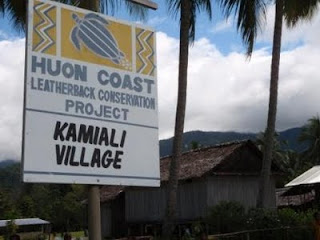 It didn’t quite live up to our expectations because we didn’t see any actual crime or dead bodies, but there was definitely an “edge” to the place. Maybe the most noticeable was when we walked around in town by ourselves outside the hotel gates or armored van and people starred at us like we were in a remote village where they don’t get any white people. The crafts for sale on the street were very inexpensive, and I had to keep my eye on Kate around the deeply discounted puppies.
We were met by the airport car service, Guard Dog Security. These guys are a real hoot. They have capitalized on the crime hype. Everybody is so terrified they pay 96Kina for a ride from the airport instead of 20Kina on a PMV. They wear military fatigues and were supposed to be armed, but they weren’t. We gave the guys some biscuits, and if they had guns, I bet they would have let us shoot them if bought them more bullets. They did drive really really fast, and the windows were covered in a wire mesh. 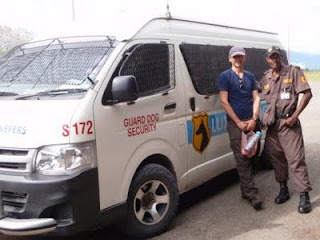 I absolutely love their logo, it is a little head of doggie, in the yellow shield. Look closely you have seen this before….

That’s right it is a direct takeoff of the 101st Airborne logo, Air Cavalry, like in Apocalypse Now, but they have substituted the horse for a dog. We also like it because the dog looks like Stinky! We suspect he is not sharing his royalties with us.

We departed and left from the lovely Eye Grease Market for the ride out there. As in my last post "Eye Grease" is supposed to mean beautiful, it wasn’t. It was muddy, scary, and filthy. 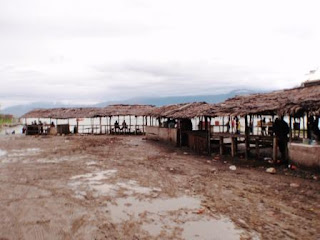 The boat ride out and back was really long, over 2 hours, it would have been a lot longer but the boats have tiller steered 75HP engines on them, so they move pretty quickly. The drivers have huge overdeveloped left arms. There aren’t a lot of people living along this coast, and the scenery was amazing. I was huddled under a tarp, and didn’t take any pictures because of the rain.
The lodge was ok, a bit rundown, but after a few years in PNG it doesn’t seem so bad. It must have been really nice at one point; unfortunately it has been decaying ever since it was first built. It is now only used by visiting researchers, but was supposed to be  a tourist lodge, that never happened.
Seems like it was built by some silly Canadian CUSA volunteers as a development project, but they didn’t set-up any business model to lure tourists. It is such a hell boat ride from a hell city that no tourist in his right mind would come here anyway. The diving isn’t great because some muddy rivers enter into the sea in the village. They should have spent the money putting in a float plane facility.
The locals use a lot of sailing canoes in this area, and all of the sails are made of traditional mats which is really unique. In Alaotau we only saw one traditional sail out of hundreds. 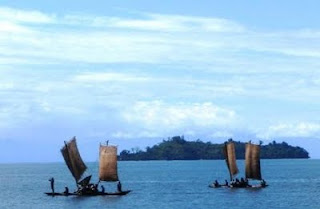 There was a lot of activity in the village because a big-wig had died so they were getting ready for his mat-mat funeral. We bumped into group after group of women and girls on the beach hauling wood for the BBQ, the men were probably all out fishing, and carrying wood is wok blong meri anyway... 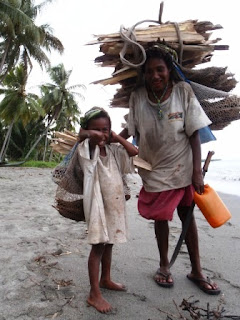 In one village on an island we found this giant pile of coral. 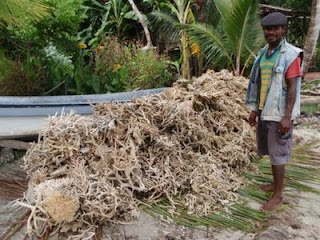 They are harvesting and drying it to make the lime for Beetlenut. This pile is basically one full boat load of coral. It sits out in the rain and sun and gets a bit bleached, then they process it. It was hard to get anybody to describe the processing of it, or the amount of money they could make because they seem to know the white people don’t approve of killing and grinding-up coral, but kate did get a video of a guy describing the entire process.
The people in this area don’t chew coral lime, they only chew with lime made of shell. The coral lime is supposed to be very “hot” or strongpela, and they sell it to people in the highlands.
To make it into powder they burn it in a bamboo fire. Then rinse it, then cook it again in a pot, and it breaks down into a very very fine dust. 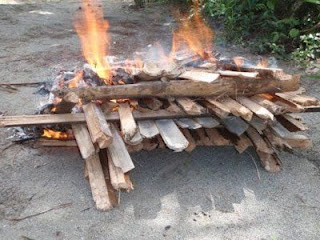 The 2 videos at the bottom show a lady rinsing it, then cooking it the final time. Its hard to see in the video but it basically just cooks to dust. The weird thing is that the shells look really dirty, and they don’t clean them very well, but when it finally breaks down in the last stage it turns pure white. Its almost like magic, the black stuff just disappears.

This was the coolest house ever. The corner closest to the front shows the vines going into the ground, then they have trimmed it like a giant topiary. We couldn’t get a straight answer from the guy how long it had been growing, but we suspect he has rebuilt the house underneath it once or twice. This traditional houses only last 5 or 10 years. 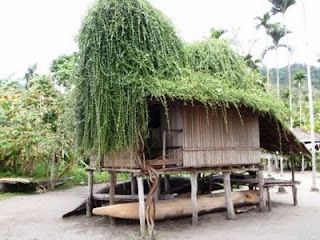 Not sure  if it will  come out, but I made this map to show Kate’s replacement where the house is. Maybe download and blow-up the picture if you’re really curious. 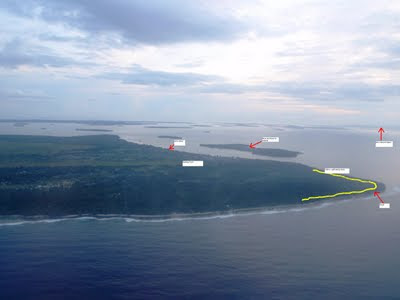 Here are two pictures from Kavieng that snuck in this post. This is a pile of clams I got at the market, it comes in a basket woven out of a palm frond. 6 Kina, about $2.50. 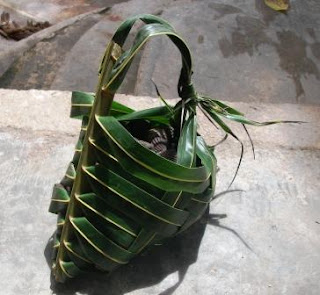 This sunset picture is from a kayak trip I did a few weeks ago.
I had a pretty bad bike wreck and hurt my shoulder this week, so no kayaking for a while. I was riding to work in the dark really early in the morning and I went down trying to get around a mud puddle. I am still worried about it, but after 4 days it seems to be getting better, and hurts less than it did before. I still can’t easily lift my arm over my head, and certainly couldn’t carry my boat to the water, much less paddle it…
This picture was from my phone, and it didn’t really come out, but it is pretty funny. There are two articles about Bouganville, a semi autonomous part of PNG that is half in and half out of the country after they had a little war in the 1990s.   The area is very poor, and just generally a mess after the insurrection. 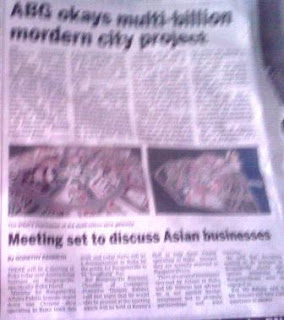 The top article talks about how they local government is meeting with a Chinese government to get an investment to rebuild the main city into a “model” city, sort of like that place in the Truman show. The Chinese will invest 1.5 Billion Kina and build the city something like that.
The other article on the same page talks about a protest they recently had in the same city where the local people wanted to get rid of the all the Chinese merchants running the trade and food stores, and how several of the stores had been destroyed or looted. The people had signs saying “Kong-Kong Get Out”.
Both articles carried quotes from Government officials, but not the same official. The one government official for the racists protest was basically acknowledging that the government was looking into steps to “preserve local business enterprises” basically supporting the racist looters.
What isn’t said, but the subtext is, that this island contains one of the richest copper mines in the entire world, that’s what the war was about. So the Chinese government might give them their Truman show city, if they can get a real good deal on all the copper.
I made a truth on the Lae, but can’t remember it…
Posted by Tim Gamble at 2:16 PM No comments: