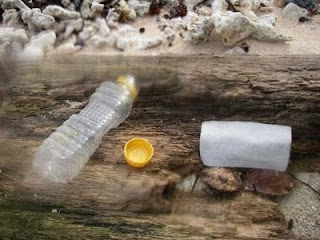 I paddled out from the dock to Edamago island. It was a beautiful still afternoon, and slightly raining, which is actually ideal paddling weather here since its not too hot. 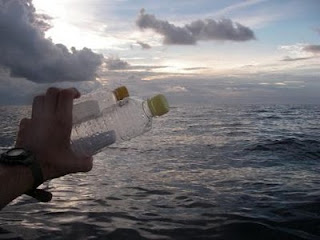 When I got there I was picking up junk on the beach and I found one of the messages in a bottle I released 4 months ago. It floated around out there for a while then ended-up back on the same island that I went to that day. See 1/26/2010. I wonder how long it sat on the beach, and how long it circulated in the water….

I had a nice paddle and re-released it along with a new bottle.
Truth: Sometimes rare things do happen.

Earlier that week I went to check-out some WWII artifacts. This pillbox and two giant guns are on Nusa Island. Right near the blow-hole spot where I have been paddling and diving.

The guns are in pretty good shape, and I can now say for sure the giant metal object in the yard at the new beach house is the bottom part of a shore gun. I wonder what happened to the rest of it…

There are giant springs scattered all around the place that must have been part of the shock absorber mechanism Kind of amazing that this stuff is just sitting around in the jungle here.. 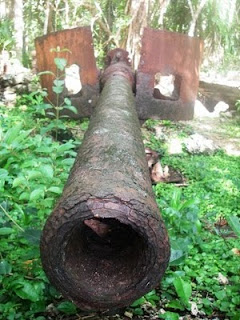 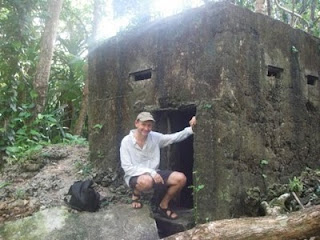 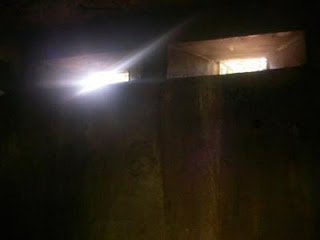 Posted by Tim Gamble at 9:12 PM No comments: 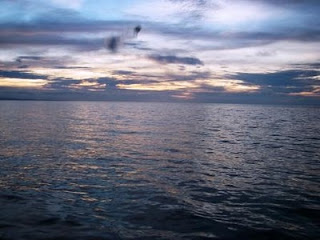 I did a short paddle for a few hours in the evening. I was going to check out this lumber ship, but it pulled-up the anchor and took off right as I got close. It’s funny that its from , we will be going there in a couple of weeks, I’ll look for this logging ship.

It was another very calm and beautiful night. The sunsets are always great, even if you don’t actually see the sun drop below the clouds, like you do in the . The pictures don’t do it justice, the colors are all over the place…

We went out to for diving with Scuba Ventures on 5/16/2010. The best time to dive the pass is on an incoming current, into the pass.

The dive is very nice wall with a lot of pelagic and reef fish on it. We went back and forth along the wall, then anchored ourselves at 20 some odd fish with a hook and just hung out in the current.

This was a very nice dive, I really enjoyed the end part just waiting in the current. It seemed almost as if I was at the aquarium watching hundreds of fish swim back and forth. My favorite were the sharks and mackerel who moved so quickly back and forth out in the deep water. This would be a good place for spearfishing…

The current was running pretty strongly up into the pass to the North around 10:00AM in the morning. The extreme low tide for the day was around noon, so at 10:00AM it was a falling tide near the bottom of the range. There didn’t seem to much current at all when we went back through around 13:00.

I went out for a short paddle to Nusa to talk to some outfitters who were running a multi-day kayaking trip. They said I could go along with them, but they later changed their mind, so in the end I didn’t go.

It was kind of a half-assed trip anyway. Paddling with a bunch of inexperienced people with a client in the front of each double and a Papua New Guinean guide in the back. They were headed up toward New Hanover, which is the same direction I hope to go on a trip soon. I’m just going to have to do it on my own I guess.

It was a very clear night, and I could see New Hanover off in the distance, see the pictures… 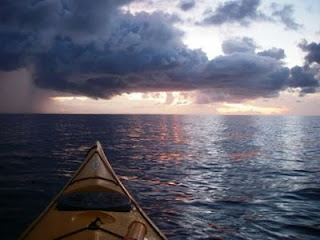 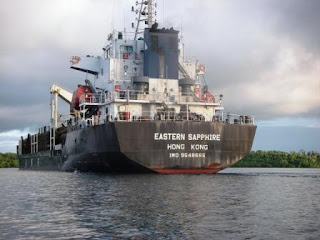 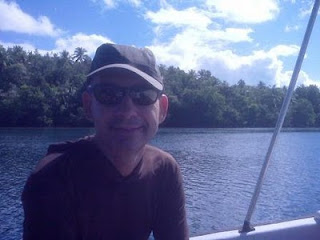 Posted by Tim Gamble at 3:56 AM No comments: 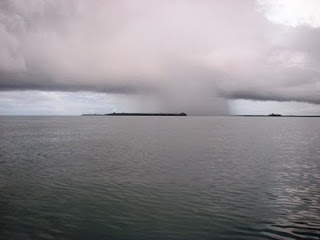 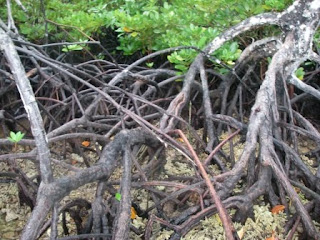 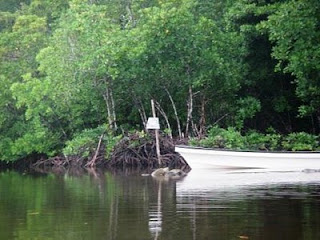 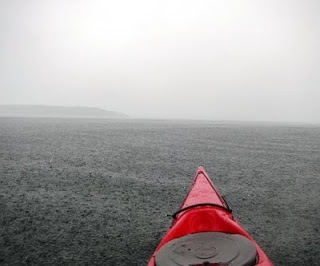 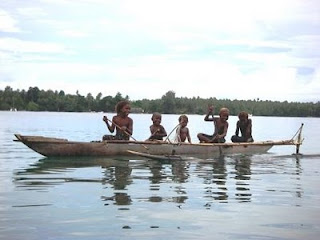 Pictures:
Rain storm heading toward me.
crocodile infested lunch spot
house and boat the sign says "petrol for sale"
storm on the way out
group of kids in a canoe that I saw as I was leaving.

I went for a longish paddle down to Kavieng is near the very north of New Ireland, but to get all the way around to the other side of the island, which is called “The West Coast” you have to go another 8 or 9 nautical miles through a small pass called “”.

I have been down in this direction before, but this time I made it to the gap between the islands, that is a lot like a river. It totally reminded of the mangrove swamps in Florida.

I kept looking out of the corner of my eye for crocadiles and the spot I stopped for lunch was just some rocks in the mangroves and wasn’t real comfortable.

I didn’t get all the way to the West coast because I was running out of time:

15:15 entrance to cut between islands.

15:56 house where they were selling fuel. This was only sign of human life in the area.

The area was interesting, but I wish I had left earlier so I could have gotten all the way to the other coast. I hope to go diving on the other coast next weekend. It is supposed be really nice. Steep wall dives and massive numbers of fish.

It had been very rainy for the past 3 or 4 days, and I got pelted by rain a couple of times, but the winds weren’t too bad, and it wasn’t really cold. It was actually much better than paddling in full sun.

I took a photo of the being in the rain on the way out, and the advancing rain just as it was getting dark. The advancing storm eventually hit me, but both storms only lasted 20 minutes or so.

Kate left the same morning to go to Tench Island. This is a tiny spot about 70 Nautical Miles North of Kavieng. The week before the Island was hit by the Beluga Revolution, a German cargo ship. It did a lot of damage to the reef so the local government asked Kate’s organization to do a survey of the damage.

I got a satellite call from her that night, and they did make it up there. They were going in little tiny “banana boats” Kate made sure they took 2 boats just in case there were problems. You hear stories about people breaking down and being lost for months at a time. The locals don’t have Sat phones, GPS untils, or EPIRBs.

Truth: its quiet when there is nobody around. 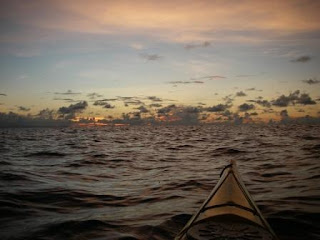 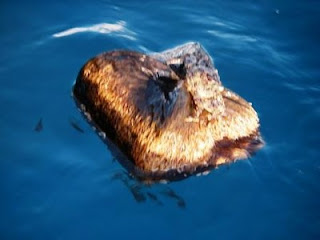 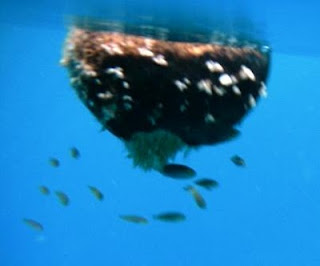 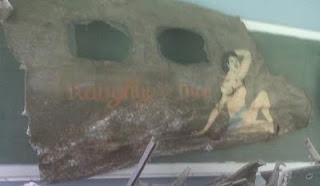 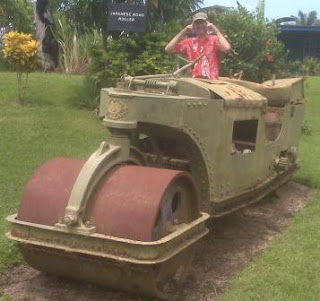 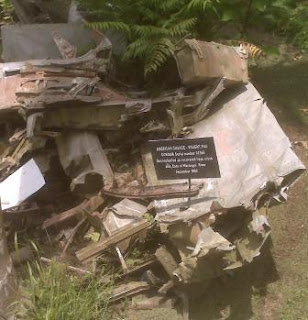 I went out for an afterwork paddle. It was a very calm day so I could easily see deep into the water. Even in the Harbor there were huge rocks covered with coral.

I went out toward where our new house is, and then paddled along the coast. I picked up a lot of floating trash. Some of it must have been at sea for a long time. It was covered with barnacles and all the writing on the bottles was in Japanese or Chinese. Many of the floating things had become little islands of life with a crab or two living on it, along with the barnacles and other things. These crabs would be quickly eaten if they were swimming free, but on the trash they have their own little protected ecosystem.

See the picture of the floating nut. There is a crab living on top, and bunch of barnacles, and a school of little fish that live underneath it. All these animals were using it for protection. Kate told me these nuts are used by the local people to do poison fishing. They crush them up, and put the pulp in the reef. It stuns the fish, and they can catch them. I decided not to try and eat one, and left it to the crab and the fish.

I got a great sunset and paddled back in the dark. A big dolphin surfaced right next to me in the dark and gave me a scare.

Truth: It is even more annoying when something goes wrong and you know better.

We went to Rabaul/Kokopo last weekend to entertain some out of town guests. The town of Rabaul was destroyed by a volcano eruption in 1995. The volcano spewed out massive amounts of black ash.

The ash covered the town and it was so heavy that everyone’s roof collapsed, or almost everyone. A few brave souls kept their houses by shoveling the ash off day after day. The town is surreal the streets are covered. It sort of looks like a city after a big snowfall.

I went swimming in the hot water pools near the volcano, but my feet sank into the sand and I got burned by the lava underneath. Ultimate truth for this would be "Lava is HOT, and will mess you up if you fool with it"


We went to General Yamamoto’s old bunker from WWII. It has cool drawings on the ceiling of a map of the World. It’s all in Japanese so it’s hard to see what is what, but it looks like it has Japan at the center and everywhere else out at the fringes.

We also saw some Japanese barges in tunnels. The US heavily bombed Rabaul during the war so the Japanese kept their stuff in tunnels. The barges are on railcars, and then were wheeled into a cave to protect them. The guy who owns the land said the Japanese came back after the war and took the engines away. That’s pretty cheeky. You subjugate the local population, kill a bunch of them, start a big war that causes their home to be destroyed. Lose the war and run away, then come back and later and collect your stuff.

The local museum had a lot of cool WWII stuff. I didn’t have my camera that day, but took a bunch of pictures with my cellphone. That’s me on a WWII steamroller!!

The story accompanying the bomber was interesting. It was shotdown, the one guy who survived went to a Japanese prison camp. After the war, and over 20 years, he came back and found the wreckage, and they put it in the museum. It took him a couple of years to find it.

The other pile of wreckage is identified in the accompanying sign as a "reconstructed" American Corsair. If this their idea of reconstructed, I'd like to see what an un-curated exhibit looks like.