It was my first paddle of the year.

Not the first time in the water that was at Coney Island for the Polar Bear Swim, but I didn't get a chance to toss a bottle out there.

We saw a really cool cable laying ship that has been out in the harbor for weeks. It is called the Guilo Verne (Jules Verne). The big ship wasn't doing any work, but they were stretching the cable over by the Jersey side from a barge.

I took this interesting picture at the Crab House restaurant, notice the huge tangle of fishing tackle in the background. 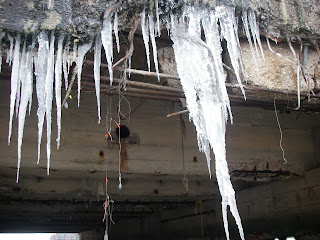 I foolishly didn't bring any lights and was getting dark by the time I got back. If I had been out any longer it would have been dangerous. It gets dark so early I should pretty always bring a light this time of year.

I was all full of sake at home, so I bought a 12yo bottle of Japanese whiskey, and enjoyed it in a nice warm bath at home. 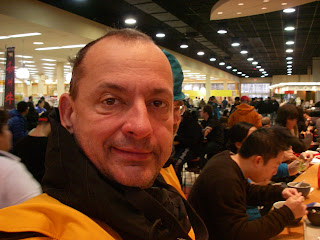