I went with a group of friends to see the space shuttle be taken into New York Harbor.

It was flown from DC to Kennedy Airport, then barged to the Intrepid Museum where it will remain on permanent display.

I met a guy under the bridge who was a very successful fisherman and gave me a lot of good tips. It seems I need to get the lures much much deeper. He recommended traditional horse hair jigs, and those long diamond shaped spoons.

The trip down was uneventful, and we had a nice lunch and a few drinks, which I followed-up with a long nap.

As we left we caught the shuttle coming in and under the Verazano  Narrows Bridge, which was kind of cool.

On the trip home things got a little funky with the group getting very split up all over the harbor. First one person left and decided to paddle up the Brooklyn shore. Then two others were uncomfortable in the rough water and split away.

All the while we were getting in the way of large ships and the ferry. I was really uncomfortable with the way it all played out. It's difficult when its not an organized trip. I practically begged some of the faster paddlers to slow down, but I couldn't get them to.

We eventually all made it home, but it was a bit white knuckle there for a while because we kept getting so spread out, and the slower paddlers were having trouble against the wind. 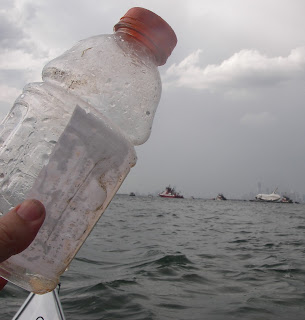 Truth was forgotten and not photographed...
Posted by Tim Gamble at 3:31 PM 1 comment:

We went out to go surfing at Breezy Point on the sandbar. 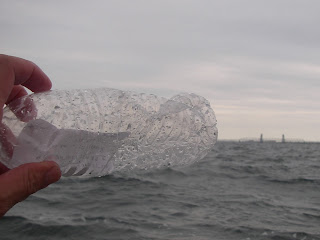 It was an overcast day and a bit windy, so everyone wore drysuits. The surf was small, but we all caught a few waves. When the surf is small there the waves break in all different places and its hard to find a clean breaking wave and know where it will start.

After the surfing we did our traditional lounging and eating lunch on the beach. 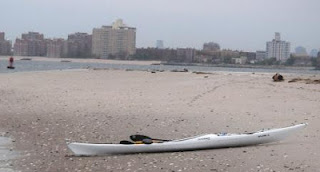 Truth: Its going to rain sometime
Posted by Tim Gamble at 3:02 PM No comments: