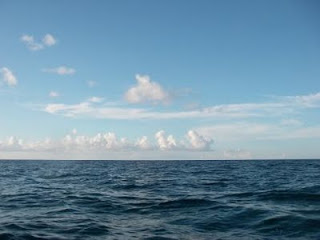 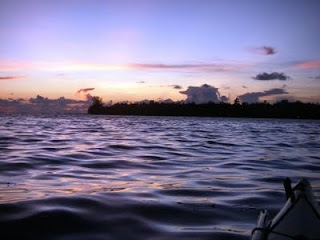 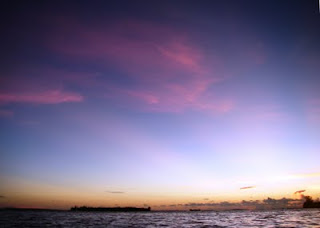 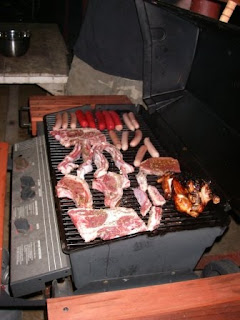 I quit work early to go for an afternoon paddle.

My plan was to try and see some of the stand-up paddle boarders surfing. There was a big group of them in town at Nusa Resort this week, but they must have gone down the coast somewhere because they weren’t at any of the 3 breaks around town.

I puttered around in the waves for a while, and then decided to paddle around Nusa and Nusa Lik as the sun was setting.

It was a picture perfect afternoon, the worst of the heat was over, and there was a slight following seas, so it made for a really nice paddle.

I went by the dive site called the “blow hole” I took a video that should say why. It must really be dramatic if there is any real surf here since the waves just pound into the rock here with no break from the reef. I will definitely have to come back, but not get too close!!

I also got to see the airplane landing. It always makes a very dramatic run right over the northern corner of the harbor. It is a great view out of the plane, and an even better one if you are sitting in the water watching it swoop down on you.

It was a really nice afternoon, especially as it started to get dark. The sky was so very very clear, with really interesting looking clouds and beautiful colors. I am including a couple of pictures that started to capture it. The pictures after the sun has just set show a bit of the colors.

One of the nice things about where we live is that the sun sets over the water, just like it does on the West Coast of Florida. From the harbor the sun sets over Nusa island, you have to go up and down t he coast or get out in a boat to see it set on the water. I couldn’t stay out long enough to see it set over the water because I hadn’t been into the harbor entrance from this angle, and I didn’t want to wander into a surf break in the dark, but I took the pictures back on the land side of the island.

There were some cool looking boats in the harbor on my way back in. They looked a lot like the pole and line tuna fishing research boat. They might have once been tuna boats, but have not been converted to ferrying cargo. Yes the name of the one in the picture really is “Elf Ride #2” It didn’t seem to have any Elves on it, maybe they were on shore leave hunting for WW II relics or something.

I’m writing this in the on my way back to the for a few weeks of work, and no paddling. I had a really long layover in . I am a member of the “Executive Club” the Air Niuginni club for business travelers. Kate and I joined it because we were told that it would keep us from getting bumped. It also gives us an added baggage allowance. The little clubhouses are nice, there isn’t one Kavieng, but almost other airports seem to have them. Free food and booze while you are waiting, as well as comfy chairs and soap in the bathrooms, you can’t beat it.

It is a good idea to hit the sandwiches hard and early when they come out. Kate ate some in Kokopo a few weeks that had been sitting around for a while. Egg and Ham salad laying around in the tropics, I’m not that tough. I just had cookies. Today I was the first one in the club so I know they were fresh.

My flight landed in at 8:00AM, and I don’t leave for until 4:30PM, so it’s a really long layover. I went right up and banged on the door of the club, but a grouchy lady told me to go away and come back later. It was classic PNG where she was pissed off telling me it was too early at 10:00AM, but then came out and found me in the lobby when it actually opened and sweetly invited me to come in, she had just made sandwiches. Then gave me a big smile and told me to have a nice flight. If people are pissed off here, they get over it quickly, or maybe they aren’t really pissed off, I just can’t figure it out sometimes.

The little shops in the airport were open, and I’m thinking this might actually be a good place to buy souvieneers. The baskets were really nice, and just a tad overpriced. The coffee was only K1.50 more than it is in the market in Kavieng. One place was actually selling beautiful tortoiseshell jewelry. That is totally wrong and illegal, but some of the pendants were beautiful. I was tempted, but I’m still feeling bad for the little bit of turtle meat some guy gave me last month. Fried in butter it was better than steak! Someone told us again that they saw a turtle for sale in the market on Friday. I have to make a point of going on Fridays. I am just going to buy them and release them.

PNG is one of the only places where we can be big spenders. I joined the “Kavieng Club” last week. We can now use the clubhouse facilities, including the golf course, and entertain our friends and family. We were advised that white people didn’t need to join anyway, and are always allowed in but we felt we ought to, especially since I have been playing golf there.

Kate took her staff to the club to celebrate the end of the field season, and one of the guys won a giant meat tray. This is an Australian thing, they have a drawing in the bar for a tray of meat. This being PNG they didn't actually have any meat on hand, and we had to come back. When we came back there was still no meat to be had, but we got some money and a voucher for the butcher. A family membership for the two of us for the rest of the year was 50 Kina, about $20. The Executive Club is 500 Kina, so I only have to drink $200 worth of beer and eat a bunch of sandwiches. They have wine too. No hard liquor, but they probably don’t have that in other airline clubs either. I think I have already saved $200 on overweight baggage, so its all gravy from now on.

I’m always impressed by people’s luggage. Today one guy checked a giant mellon or squash. I was waiting for my bag, and this big vegetable came buy on the belt with a tag that said “Fragile” looped around the stem. There were also a bunch of split opened cardboard boxes with different kinds of bananas. Kate told me in she saw a puppy taped into a box with just his head sticking out. That I would like to see.

I still haven’t found my pet pig. Kate tried to buy one for me for my birthday. She posted a sign down at the market with a drawing. I’m not sure where I was supposed to keep it. I’m sure we aren’t zoned for agricultural pets, and I don’t think stinky would like it if I let him run around the yard. I’d want to train him to be a watch pig.

Truth: Clouds can be beautiful

Email ThisBlogThis!Share to TwitterShare to FacebookShare to Pinterest
Labels: 11 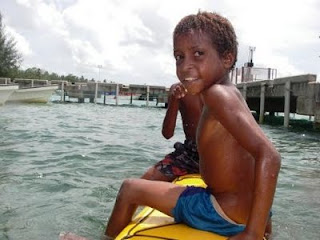 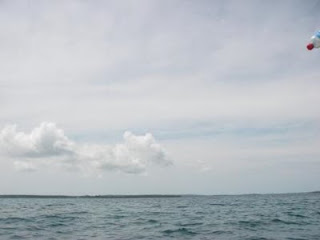 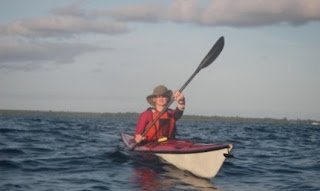 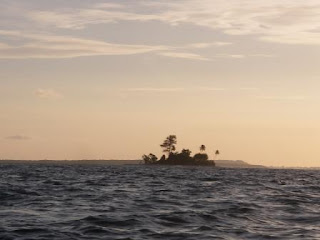 Kate and I planned to go to Rawl island and have a campout on Saturday night. Rawl is about 3 or 4 NM from Kavieng. It is a cool little tiny island. I went there about a month when some guy took me fishing. Although it is small it has a huge tree with an Osprey nest on it.


Kate knows the people who’s family owns it, and we got permission to stay over. In Papua New Guinea somebody owns everything.


We left to paddle out there around 15:30. We did a bit of trolling and lollygagging around, and arrived about 17:00. We had to paddle around the island to find a spot with no surf, but there was a calm sheltered beach on the south side.


You can see from the picture that the island is probably only 20 or 30 yards in diameter.


There is a perfect little grassy tent site up over looking the beach.


I started to feel kind of bad after we landed. Kate knew I was sick when I turned down booze and a campfire after dinner. Those two things, and a midnight swim are some of my favorite campout activities.

I felt worse and worse as the night progressed, didn’t sleep well, and couldn’t eat anything in the morning, so we paddled back home. That wasn’t fun in the boiling hot sun, but by taking a few swims on the way we made it home.

I managed to fit 3 little kids on my kayak back near the dock. I think I could do 4 or 5 before the boat got really hard to keep upright. The problem is if I flipped I would bean them trying to roll up. The local kids are always very curious about kayak paddling, since they are used to their outrigger canoes.
Posted by Tim Gamble at 5:43 PM No comments:

I knocked off of work, and went for a paddle to celebrate my birthday on the water. I left about 15:00 and got back around 17:30.

If you look really close at the end of this video you can see the fish flying up out of the water like torpedos.

The weather was a bit overcast, but that was nice because it wasn’t so hot. Like everywhere the last part of the day can be the hottest here. I keep thinking I’m adjusted to it, but then I stand around outside for a bit, and start wilting and just want to sit in the shade and do nothing. I am actually starting to think that the only way to do any serious paddling is to get up at 2 or 3 in the morning and go when it is still dark for a most of the trip.

I paddled out past nago island into a pretty stiff wind 10 – 15kts, figuring I would have a nice easy ride home.

I explored a little deserted island, but couldn’t poke around it too much since it was getting late, and my plan for a wind assist on the way back was cancelled because the wind shifted to be from the west, and the became a lot weaker. I was also distracted by a huge school of fish.

I felt good to paddle hard and push myself a bit.