Kate and I raced in the Gowanus Challenge boat race in Brooklyn.

It was an amazing show of wackiness, all for a good cause, the Dredgers!!!

My friend Jonathan took these amazing pictures, but link back to the race page, for full details..

The name of our team was "Greased Lightning" we dressed-up like the characters from Grease.


We Didn't actually release a bottle there was already so much crap in the water we couldn't bear to.

We did our annual Figment Festival event on Governors Island on 6/8 and 6/9.

It was a big success just like the last time, maybe even more people who participated.

There are a ton of great pictures over on the website:

Also checkout this YouTube of the building demolition on Governors Island. Shot from a kayak just South of the Island on 6/9/2013.

I volunteered to help lead a trip for the Brooklyn Bridge Boathouse.

They have a very nice new dock, and wonderful volunteers and equipment. It was a real joy to paddle a "public" boat, that was actually nice where everything worked, even the skeg.

There was a nice little spot of very heavy current with a tiny race under the Williamsburg Bridge that I had never seen before.

We went North from their facility all the way up to Barreto Point Park in the Bronx. This is a waterfront park that has been under construction for ever, but is now open for business and super busy. It's probably the only park around for miles and miles and there were tons of people there. I scored an excellent BBQ plate from "Father and Sons" BBQ stand. It was a little bit heavy for paddling food, but tasty. 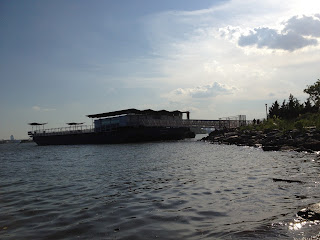 On the way back we decided to go along the North side of Wards Island. I had never done this before and it was cool and fun. We found a tiny whitewater wave on some rocks where the current was draining out into the Hudson. Just like on a whitewater river you could actually see the level of the water being lower.

We stopped at Hallets cove to put lights on for the return trip home in a stiff current. 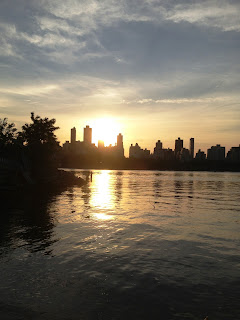