I went out for an afternoon paddle from our house. The surf was pretty high at our house, but fairly mellow on the outside of Nusa. The difference was the direction of the swell. It was from the North East, and Nusa faces West, so when I got around the front of the island I could paddle right up to it.

I did a good surf ride in on way home. As long as the waves aren’t too big, AND its high tide I can come right into the front of our house safely.

We spent a week in Alotau for the annual PNG Canoe Festival. It was cool, but a bit of a disappointment. I missed all the paddling canoes, and some of the cool things we found and bought were stolen. Welcome to PNG….In true PNG form it was very disorganized, and the few paddlers that were there only came in the mornings when we weren’t around. 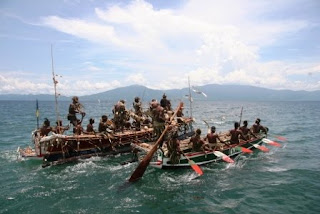 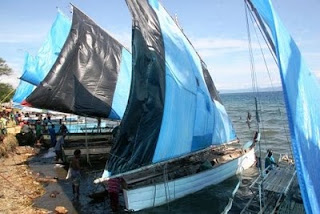 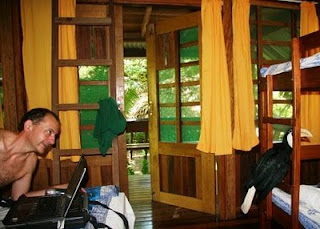 Most of the boats were sailing canoes. They are MUCH bigger than the traditional paddling ones we have in . The boats are totally symmetrical, and the sail always has to be outside the outrigger, so when they “come around” the bow becomes the stern, and they start sailing in the other direction, while the sail stays out away from the outrigger.

We did a ride on one of them on the first day which was cool.

We went up to a resort called Tawalli for a few days before to do a bit of scuba diving. I think the diving up here is even better than it is in . I found a cool spear on the bottom of the reef, but it was stolen from our hotel when we went into Alotau, so I didn’t get to take it home.

One of the interesting things to do at the resort was a tour of the "skull caves" The local people used to display the skulls of their enemies that they killed and ate around their houses, but when the missionaries came they relocated all the skulls to remote caves. The skulls are being slowly covered over by limestone and incorporated into the rock.

We also bought a traditional fishing spear but that was broken by the airline. It was not a good weekend for souvenir fishing spears.