We tried to go surfing on yet another very very mild late fall day. It was 70 degrees when we loaded up the boats in Park Slope, and maybe 65 at the put in, and a bit overcast.

There was very little surf, and it was broken up, so it was hard to catch good rides, but we had fun playing around in it, and trying to catch waves. 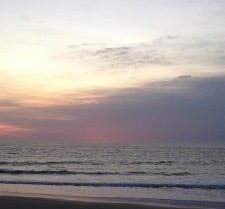 After a while I got bored and tried to do some fishing, but a fish bit off the end of my lure, and that seemed to make it very unappetizing, since I didn’t get any more bites. I did paddle around the point and saw lots of people surfcasting and some jetski guys jumping the shore surf. It was amazing how high they could jump on fairly small waves.

I watched a fisherman catch a small stripped bass, but he told me later that was the only one he caught, and that the fishing has been very poor this year. It might be because the water is still very warm, and fish haven't migrated.
We enjoyed our bagels and a few glasses of wine and watched the Sun settle into a cloudy Western sky.  We started back around 4:45PM, and probably got out of the water by 6:00PM when it was pretty dark.

Truth: It’s colder when dark.
Posted by Tim Gamble at 9:59 AM No comments:

I went to a kayaking seminar up in Stonington CT. The idea was to paddle in all the tide races near there. They have  2 that are normally used. Sugar Reef, and some other nearby reefs that run on the ebb, and Wikapesa passage that runs on the flood.

On 10/28 we went to Sugar Reef for a tide race paddle, but it was a bust because it was VERY windy, but the wind was going with current, and effectively flattened it to nothing.

We could see where it would normally be running at about 1:00PM, and stayed for about an hour, but it never  really turned on and the waves were barely 1 foot peak to trough.
Using the Currenct predictions for Napatree point we get a max ebb at 14:40 of 3.1 knots, so this should have made the race run, but the wind was going in exactly the same direction, and knocked  off.  We got on the reef around 2:00PM.  Spreading out to the West from Sugar Reef, we also tried some other spots that are part of the same reef system, Horeshoe Reef?? But there were no good waves anywhere. 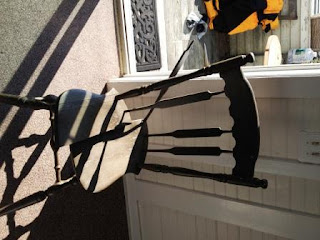 The weather the next day was even worse, more wind from the Northwest around 20Kts. The plan was to paddle out to a place called Wikapessa pass just off the Eastern tip of the Fischer’s Island. The current was flooding. This spot only runs on the flood, so it would have been Wind against current.

The instructors tried to split the people into 3 groups, but the participants didn’t really pay attention and were soon spread out all over the harbor, about 20 people total. I got way out in front figuring the leader would take us to the best spot, but he went a bit down current along the southern side of Fischer’s Island. I think his plan was to work along the shore out of the current back up to the spot, but the people were so spread out they got concerned, and took most of the group back to the CT shore.

One of the groups from the far back went on to the pass, and had a good hour or so of surfing, because their instructor noticed the current was less further East, and had them paddle over that way. Nobody else knew that was happening, and I had to stick with my group. 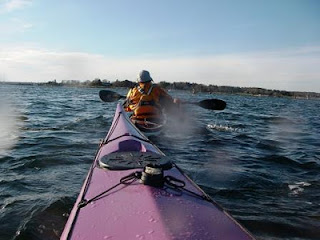 The slog back along the coast was miserable since it stayed really windy, with the wind shifting off to the Northeast, and then pretty heavy rain. We stopped for lunch right outside of the harbor, which was really unpleasant in the cold rain. I didn’t have a chart and wasn’t paying attention or I would have requested we simply go back to the bar. It was only a 30 minute paddle from lunch back to the dock.

On the third day the wind was even greater, and I took the less aggressive choice of the two trips back to Napatree Point. It was so cold and the wind so strong that I though getting back to Wikapesa not have been possible, but this was a mistake, since that group went out, surfed, and came back before we got back from a boring slog along the beach.
I didn’t have any pogies or gloves, but was able to borrow a set of gloves from a friend on the last day.

The entire region was pummeled by SNOW Saturday and Sunday, but in our little sliver of CT it was just rain. We saw the snow on the drive back on Sunday night.

Truth: Ice is slippery.
Posted by Tim Gamble at 9:31 AM No comments:

For my birthday I went hunting in Florida in the Lower Suwannee National Wildlife Refuge. We were hunting wild pigs, or feral hogs (which sounds cooler). 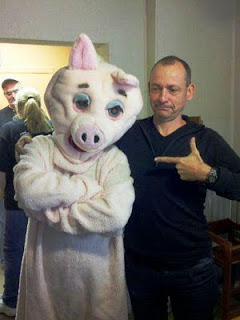 It was a great time of year to be out in the woods, a bit cool in the early morning, but really nice in the afternoons.

I went to an isolated part of our favorite spot to very thick brush. I got up in a tree where I got one a number of years ago, and waited. It is black powder season and we were using primitive single shot muzzle loading guns where you have to manually add the powder and shot. They are MUCH more accurate and reliable than the old-time kind, and almost always go off, but the reloading is very time consuming.

After an hour or so ~ 11:00 AM I saw some movement in the bush, and then a pig appeared rooting around in the palmettos. I waited 5 minutes or so for him to get closer, and very cautiously got ready. When I thought he was close enough I took a shot, but I MISSED him.
The noise from these guns is deafening and the hog ran right toward me. The noise was so tremendous he didn’t know where it had come from, and he basically run right under my tree, coming within a few feet of me, but then of course he disappeared into the bush never to be seen again. 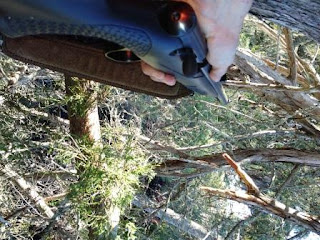 Later that same day, about 15:00 I saw another one from another tree, but he never got close enough to get a bead on, so I didn’t get a shot in on him. The second one was at a new spot, and I needed to clear a bit more of the dead branches out of the way to hunt from that tree. 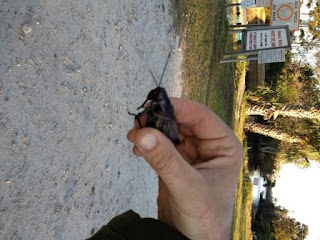 Truth: Sometimes you miss.
Posted by Tim Gamble at 9:31 AM No comments:

I went for an afternoon paddle on a weekend, and I FINALLY saw the parrots of Weehawken, after many years I finally made it there. 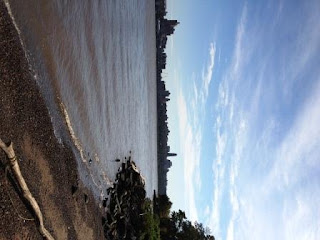 All the Tide Race boats were out at a show, so I took the Outer Island. Like the LV Explorer, I find this boat difficult to control because I can’t hook my knees into it well.

It was windy from the South so we didn’t want to get too far up river, hence the parrot stop for lunch. 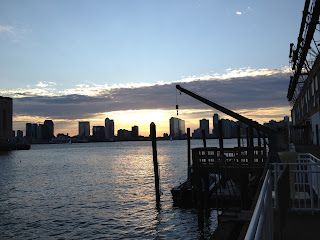 Truth:
Wood is softer than rock.
Posted by Tim Gamble at 9:25 AM No comments:

I went with some friends to go surfing at Breezy Point. It was another really nice day, but there was no surf, or very very little surf anyway.

We had fun farting around in the little waves, and then had a nice lunch of Bagel Hole bagels and Bandit box wine. 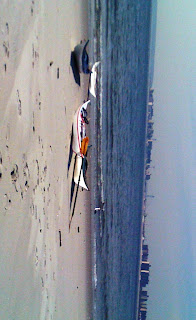 It was cool to skip out on work for a day and lounge in the last really nice day of the year on the beach!
Posted by Tim Gamble at 9:24 AM No comments:

We went for a BBQ picnic on the piers down below the Gowanus Canal entrance. It was an afternoon/evening picnic that I extended into a sleepover in a bivy bag.

Current turned back to flood about 3:30PM when we arrived.
I called and emailed everyone I could think of, and finally got a pretty good of about 12 people in the end from Pier 96, Pier 66, Pier 40, and Red Hook.

I didn’t do a great job on the fire. I wanted to keep it on the “downlow” so as not to attract attention, but it was ok, and another smart person brought a campstove to take up the slack. I put the fire too close to the water so it was snuffed out during the fish cooking session, but the stove came to the rescue.

The night was really nice, warm about 70 degrees, and an almost full moon. There is a bit too much ambient light from the neighboring piers. I watched tugs and all kinds of boats go in and out of the harbor all night. There is a perfect view of the Statue of Liberty from here.

It was a crazy warm day, it must have been 80 in the height of the afternoon.
I forgot my camera, but I got a woman to email me this picture of me trying to drown her kid by giving him a ride. 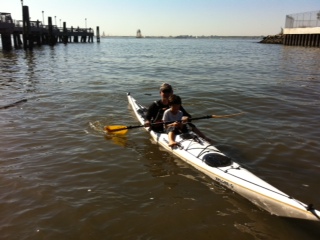 I paddled the Tide Race Xplore S, which is a nice boat, sort of like an Explorer.
I had always wanted to camp here, but it was kind of anticlimactic as a solo event. I got up early and left so I could try and go surfing on Monday 10/10/2011.

Posted by Tim Gamble at 9:20 AM No comments: