5/22/2015 Chilly about 50 degrees and windy. We launched from Bar Harbor and went south/west down the coast. There are some amazing cliffs along this section of the coastline. The swell was fairly mellow, but even so there was some dramatic waves slamming into rocks to enjoy. 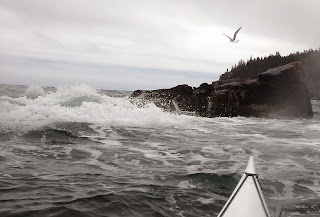 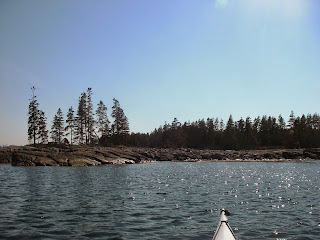 We had lunch at the beach in Acadia park, this is usually closed to boats and used for swimming, but we were early in the season and they hadn’t set-up for swimming yet.

Ebbs to the south/west  Floods to the north/east. So we paddled against a mild current in both directions.


5/23/2015 It was very Windy, with wind from the North and West @ up to 20kts, although it let off later in the day,  so we did a very late start around 15:00 from a little bridge at the intersection of 102 and 3 on Mt. Desert Island. There is a very long protected cut in the island which we paddled in to stay in the lee of the wind. We paddled down to Southwest Harbor and took the car back. Arrived in SW Harbor around 17:15 after a bit of exploring the coast on the way down.


We paddled against a light flood to start and current should have turned by the end of the trip, but the wind made it too difficult to tell.


5/24/2015 Still windy, maybe 10-15kts. We started from South West Harbor @ 12:00 and went out around Great Cranberry Island. There was some significant swell up to 3ft, but options for surfing were limited since it was coming straight in from ocean to East and coast was just rocks.

We stopped for lunch around the back side of GC Island around 13:45 where I found some good lobster floats. We then went around Little Cranberry and Sutton Island. Reached the back of Sutton around 16:30. We then had a slow crossing into the wind back to Southwest Harbor around 17:30.

Saw some amazing coastline along the shore side of Somes Island. The picture doesn’t do it justice but this one area with dramatic cuts into the rock was really cool. If it was warmer there were some cool spots for rock jumping.

5/25/2015 We went  from Sorrento Harbor to the South along the islands and the mainland. We stopped on the mainland for lunch and a break. As with the other places we paddled the coastline was just stunning.  Wind was fairly mellow peaked at 10kts. There was a bit of surf, but it just broke on the shore and it wasn’t possible to surf or play in it.


On the way back we had an amazing encounter with a small seal. It kept looking at us and coming closer and closer. Eventually it started to put its head up on our boats and start to look like it was going to climb on the boat. At one point it nuzzled my paddle, and I scratched it under the chin like a dog. Another instance it swam upside down with its belly along my keel and the flippers running along the side of the boat.

Unfortunately my camera battery was dying, but I got a few nice photos. 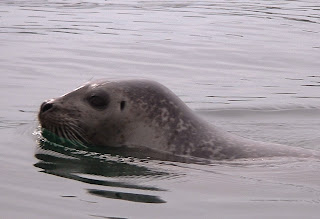 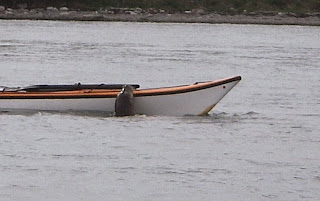 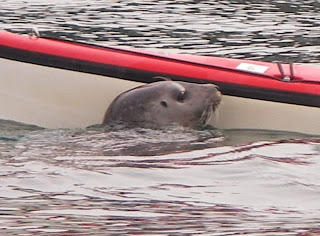 Truth: It always takes longer than you think to get ready.