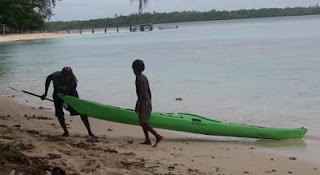 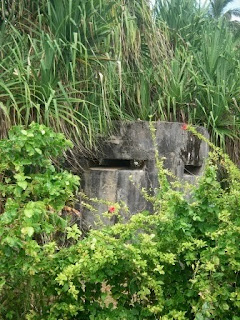 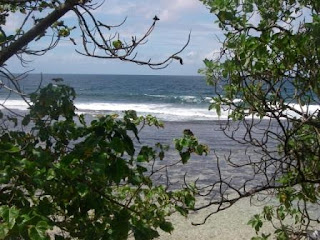 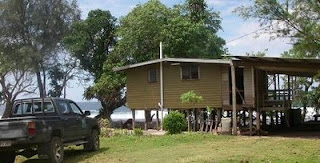 We actually didn’t release a bottle, but I wanted to post pictures of the new house Kate found for us on the beach. We have been talking to the owner for a few months, and they have started heavy duty construction work renovating it, so it is starting to look like we might actually be able to rent it. You never know with big projects here, some of them never ever happen.

It is about 1 mile out of town, and because of the way the road twists around it might be faster to kayak to work than bike, certainly a whole lot nicer….

The house is just outside of the harbor on what is really the North coast, but they call the East coast of the island. The surf is only a few feet on the day I took these pictures, but sometimes it is much higher. The picture through the trees is from the deck, just outside of our bedroom. It is right on the water, like 30ft from it, but up high on pilings so I don’t think it will flood.

The kayaks can go right under the house, which will be great since now we have to go to Kate’s office, and get them out of her storage container. Which she needs to fill with work stuff.

This area was heavily fortified by the Japanese during the war. There is the turrent mechanism from an artillery piece in the side yard, and the neighbors have a really cool pillbox in their yard. I’m actually surprised they didn’t incorporate it in their house. There are supposed to be several other gun emplacements around somewhere, I have to check it out more carefully next time.

The house was kind of a wreck, but the owner is having a massive renovation done, and it seems like they are doing a pretty good job.

We are still waiting on parts for the water system. This area does not get city water, so we need to have a large tank put in, with a system to collect rain water from the roof. There is also a lot of work to do inside the house, but they have put on a new roof, all new windows, and new screens.

On Friday on the way home we saw the sky was all lit up from a massive fire. For some reason someone was burning a giant patch of swamp/grassland. Maybe for planting, but we drove over near it, and took this little video.

On Saturday we went for a short paddle and hung out on Nago Island. Some of the local kids were out chopping down coconuts. They gave us one, so I sent them out for a kayak ride. They seemed to get a kick out of it, and we enjoyed the coconut.

Later the Nago security guard told us a fantastic story about a crashed Japanese war plane in his village on the other end of the island. He said t he plane came and was filled-up with gold that they mined, then it crashed with the gold still in it. But the local kustom chief has made it taboo, and there is an evil spirit in the form of giant snake that guards the gold.