We FINALLY moved into our new house.

landlords, contractors, are bad, but the plumber was a new kind of bad, so it took a while…

We are still getting settled, every afternoon after lunch, and every weekend, has been a different construction, repair, cleaning, break up dog fight, job, but we are getting to the end of it. I want to bring the kayaks over soon, We already unpacked the gin.

I’m including some pictures, and you can see the highs and the lows of the place. 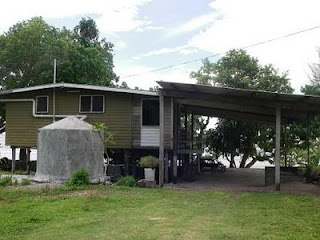 Although it looks like an ICBM bunker, it is in fact our water tank, the water comes from the rainwater off the roof. 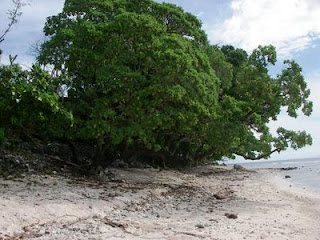 The house is behind the trees you can’t quite see it.

A dog on the porch (Maity). 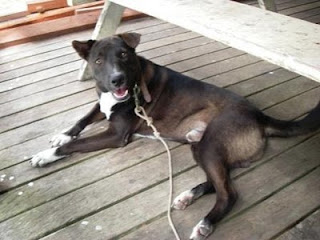 He was bad, so he was chained up, Stinky was moving too fast and his portrait was blurry. They have developed a fighting technique with the other dogs. Maity goes out to make friends, the neighbor dog attacks him, when the other dog’s back is turned Stinky jumps on top and gets the other dog by the neck. It’s both savage and effective.

A view of the sea from the porch. 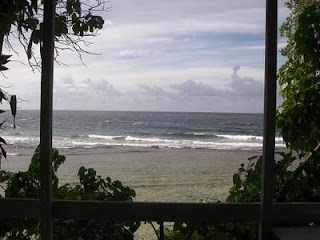 A view of the side of the house. 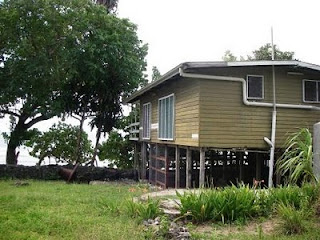 The big metal thing on the left hand side of the picture is the turret to a Japanese artillery piece that was left here at the end of WWII. It is solid steel and weighs more than a car.

A view of the hammock. 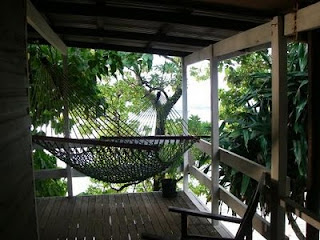 We bought this hammock when we lived in , but our yard was too small to put up, and we have been toting it around for a couple of years. This is its last move. 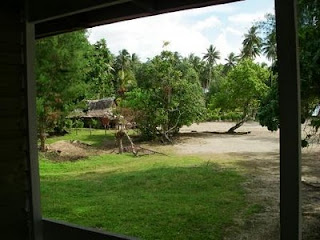 They live in a traditional house with no electricity, no plumbing, no nothing. I went outside to type this on the porch, and 8 little kids were staring at me, so I went inside. We did put up bamboo shades. 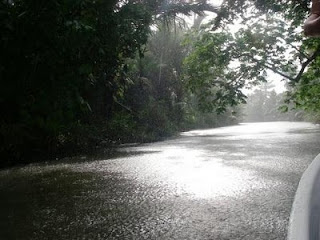 We decided at the last minute to take a dive trip for the weekend on a local couple’s dive boat, the PNG Explorer, We went up to see the a sunken ship off of New Hanover. The ship was a Japanese ship, and American planes caught it when it was delivering a minisub. The minisub is laying about 100ft away from the wreck on the bottom. It is really small, I can't imagine people living in it.

There was another smaller wreck nearby that we also dove.

The captain of our ship showed us a picture from WWII of one ship on fire, and almost completely sunk, and the other one under attack. You can see the sailors running, and the bomb dropping toward the ship. All of the people in the picture were probably killed. Really intense.

The diving was nice, interesting wrecks and very sheltered, but the visibility wasn’t great, maybe 30 or 40 feet. It is often over 200 here, so I’m sure getting spoiled.

The food and drinking on the ship was also excellent, and it was nice to get away.

We also took a trip up a local river, and watched a young guy climb up a bettlenut tree.

This guy on the beach looks like sideshow bob on the Simpsons. 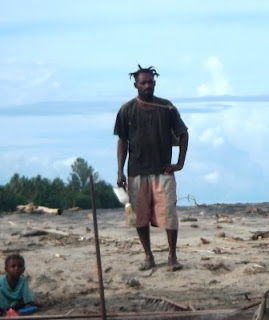 Kate is wearing this crazy radar reflecting hat that a friend of mine gave me in NYC. 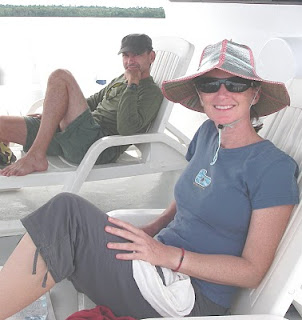 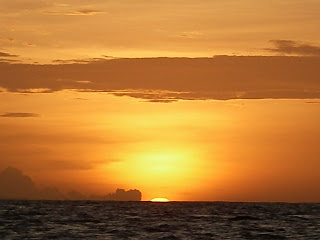 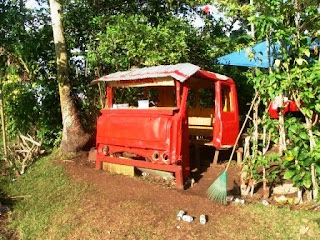 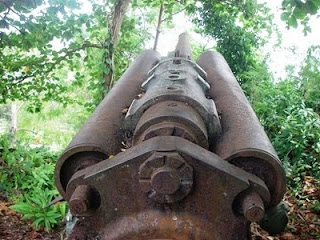 Just did a short evening paddle to try and get some exercise. We have been really busy trying to get our new house sorted out, so I haven’t had much time for kayaking.

A few days earlier I was trying to sort out the internet link between the government offices, and took these pictures of this giant gun. It is in really good shape, and is in the hill right above my office. You can actually see the bits of brass mechanism that controlled the firing, and the gears look like they would turn with some grease. It’s just nutty this stuff is laying around….

Check out this bettlenut stand. It is made out of an old truck cab. Its hard to read, but it says “Transformers!” on the awning. A space age robot transformed itself into a narcotics stand.


Truth: Some things happen when you aren’t expecting them to.
Posted by Tim Gamble at 11:41 PM No comments: