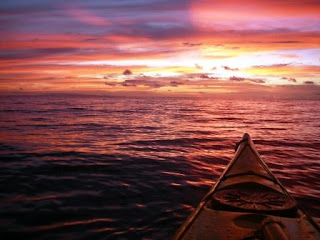 I went out for a short Sunday evening paddle.

I went out around the near the beach house point, but then it got really dark, so I went back. I didn’t want to deal with the surf in the dark.

There is still no moon, so it is impossible to see anything when the sun goes down. There are only a few points of light for reference along the shore, one of them is our new house’s security lights.

I have been meaning to do a long trip with lots of paddling, and I wanted to do a lot of it at night. I have to remember to plan the trip for when the moon is full, and also to do the paddling around the moon. Ie night paddling with an early moon rise, or early morning paddling with a late moon set.

On the way back in the harbor I was trying to avoid the surf breaks on either side of the harbor entrance, and also not get run over. Other motorboats zip around, some with no lights on. I also came across groups of people fishing in canoes who were just invisible until I was right up on them.

Everybody is a bit nervous. Last week some armed men stole a boat from one of the dive companies. When the divers were under water the came up and pointed guns at the crew and took the boat. When divers came up their crew were there treading water. The worry is they will use the boat for a big crime, and use it as a getaway boat. It was one of the fastest ones in the town. Yikes it’s like .

I went to check the progress on the house this weekend. It is coming along. They attached a pipe from the neighboring large house for the water, since our tank still isn’t ready. Our contractor is supposed to start on Thursday to do the work we need to fix it all up.

Truth: You don't know how much you need electricity until you don't have it. 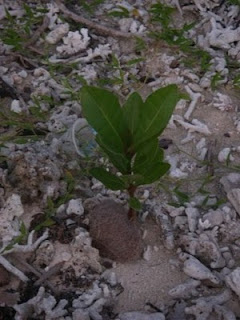 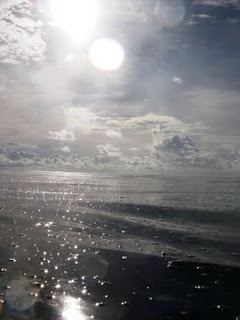 I wasn’t feeling much like paddling, but wanted to go for a snorkel so I went out . I had wanted to go to Rawl, but the heat was just killer and I was feeling crappy, after an hour so I stopped at Edamago.

As I was approaching the island there was this funny area in the lee with bubbles all over it. It must have been from the surf, and then the swell changed and just left this hot sticky scummy water. Yech. You can “feel” the heat in this picture…

I had to immediately jump in the water to try and cool down. I went out to the West and then eventually to the south near the surf break, but the time I went over to the break I was on the outside of it.

The water was cloudy to the West but I kept swimming farther and farther out looking for something different. I must have been 300 yards from shore, when I found very clear water toward the south, outside the break. The reef here was amazing, all kinds of coral and TONS of it. Lots of fish too. I saw one or two that would have been worth catching, and even 2 small sea turtles. It was really beautiful, and so close to town. In the future it would be best to snorkel from the kayak without the long swim from shore through surf and shallow water.

When I got a cramp in my foot, I was borrowing too small fins, I wanted to go in and realized I would have a problem getting over the break since it was very shallow on top of the reef. There wasn’t much surf, but there was a bit. Eventually I found a small valley where the water was a tad deeper. Fortunately it got deeper one I got past the break and I could swim right up to the shore. This would NOT be possible at a low tide.

I found a cool poison nut growing a new tree on the beach. Kate says these nuts are poison and that the local people grind them up to use them for fishing by stunning the reef fish. So do NOT eat these, they are NOT small funny shaped coconuts!


One of my regular kayaking friends found this message floating in . It’s hard to believe that it was in the water for 4 years. It doesn’t look very worn or faded. It was in a large plastic juice bottle.

The story was really wacky, and didn’t make any sense. I’m not sure if the person who wrote it dropped it into the water, or if they just reused the paper.

I tried searching for the author:

But can’t find her for sure. I suppose I’ll try and send a letter when I get back to the .

Blow-up the picture below and read the wacke Posted by Tim Gamble at 3:46 AM No comments: 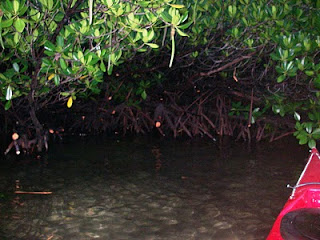 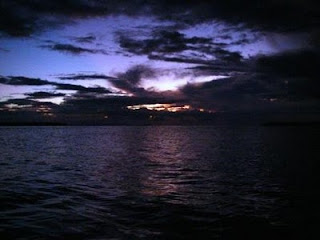 We went to a big fourth of July party yesterday, and I /was feeling a bit raw, but wanted to get out for a paddle in the late afternoon. I didn’t get on the water until 5 or so, and it quickly got very dark.

The tide was pretty high, and there was no moon, so when it got dark I couldn’t see a thing.

I decided to go to the north around (sp?) and go along the coast since the water was high, and it looked like it was pretty shallow.

I saw a few people a young woman came out to the beach, followed by 2 young guys with guitars, go figure???

It gets very swampy a bit further on, and if there are people living in there, they aren’t right on the waters edge, its just miles and miles of mangroves.

I did find one spot where somebody had cut a bunch of branches, but I can’t imagine why. It seemed the stuff they cut away was right there in the water, but they must have taken some of it with them.

It was shallow and boring so I turned around just as it was getting really dark and paddled home using the lights on the cape as a beacon.

Once I came around the corner I was blinded by a super bright light at . A lot of the rest of town was dark because of the blackouts, but they make their own electricity out there.

The bioluminescence has been really impressive lately. Maybe because there is no moon, but it just glows very brightly in a light green. I tried making a movie of it, it just came out as black with a few white spots. It is stronger and weaker in places, but when it is going it is really going and super bright.

Posted by Tim Gamble at 3:37 AM No comments:

Kate and took our canoe out for its inaugural voyage. We bought it a couple of months ago when we did our trip down the East coast to the southern end of .

We had to take it apart to get it home, and we didn’t get around to putting it back together until today. We did paint it with leftover paint, but now that it is done I realize it looks like a German Uboat. Dark Gray, with black trim. I will not name it "U232" or anything, I promise. 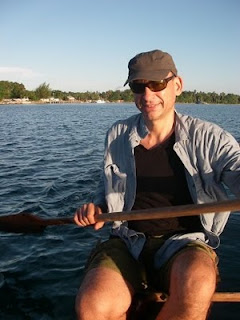 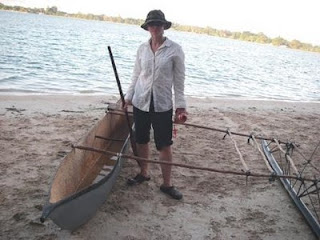 The canoe leaks quite a bit. Kate called it “sweating” it just comes right through the wood, like sweat. So we need to bring a bailer with us on our next trip. I have seen other canoe paddlers, doing a lot bailing. I watched 2 kids in leaky canoe, the one in the front with a coconut shell was bailing furiously while the kid in the back was paddling, but they couldn’t get to the shore in time… We paddled over to Nusa Resort to have drinks and dinner. The boat has a bad habit of turning to the left toward the outrigger. Even when I paddle on the left hand side it turns left, but I’ve noticed this in other canoes, so it might be operator error, not an assembly problem.

We are just back after one month in the . We didn’t get a real vacation there because we were both working a lot, but I tried to get my quota of rich food in. Bad news is I have high cholesterol, got to lay off that butter.

Our Bodies of water project was a big success. We had a lot of fun, saw a ton of friends, saw some real freaks. The fact that some people thought we were freaks was a bonus.

See www.bodiesoftrash.org for details and pictures.

Truth: If you are living it you don’t need to read about it.

Posted by Tim Gamble at 3:28 AM No comments: