I went snorkeling in front of the house a few times this week. Looks like the diving here will be very good. I was only freediving but there are lots of fish because there is a huge ledge that runs along the end of the reef.

At one section there is a cool swimthrough. You enter vertically on the flat of the reef at about 30 feet and come out horizontally in the side of the ledge at about 40. I have to give it a try as a freedive when Kate is out there with me.

I have seen lots of pelagic fish, tuna and jacks, and a couple of pretty good size sharks.

We are going to try and get tanks and do this as a dive, because its too deep to spend much time down there just holding my breath.

Earlier in the week I found these excellent mangoes at the market. Everybody in town was complaining about the price. They are 7 kina, about $3 USD; Still cheaper than Dean and Deluca, but not by much. They are called Rabaul Mangoes, after the town on New Britian with the volcano. 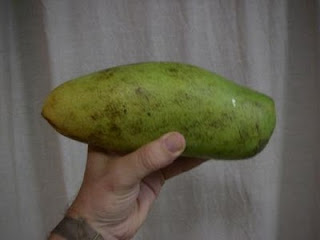 I had to fix the network antenna at the Government office. I was putting in a new mast for the antenna. The antenna is right next to this old Japanese artillery piece. This is by far the best one I have seen since I have been here. Notice the PNG style networking tools, a shovel and a piece of hardwood. 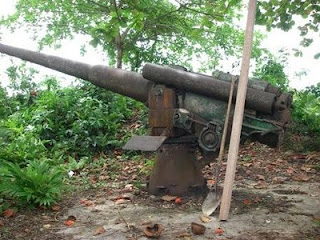 I went for an afternoon paddle on a very rainy and stormy Monday. I was supposed to go diving at one of the best dive sites around here, , but it was cancelled because of bad weather.

I waited till the very end of the day, then thought I would duck out on an afternoon paddle. It was still pretty stormy and windy, but the tide was high and did a launch through the surf, in front of the house.

The swell was pretty big, and by the time I turned around it was getting very dark. Since it was cloudy it got extra dark, extra early.

It was pretty hairy near the end. I haven’t been paddling in big waves in the dark in a while, and forgot how disorienting it can be.

As I got close to the house I could see that Kate was down on the beach with our giant super bright flashlight.

She of course couldn’t see me because of the dark, and she was worried. I almost accidently got surfed in, in the heavy surf, but managed to get back out and go around to the entrance to the harbor where the surf was much less. I walked back up the beach.

Just another reminder that I should always bring a light, even if its only close to dark!

There was a torrential rain storm about 15 minutes after I got back, that would have been very unpleasant since it was way too rough to get out a jacket when I was on the water.

Posted by Tim Gamble at 8:57 PM No comments:

I went for an afterwork paddle from the house.

I finally finshed fixing up the racks for the boats under the house so now it was time to paddle. All of the neighbor kids came over and joined in when I was working on it. By the time Kate came home there were 6 of them doing various jobs with me. I launched at high tide, its only about 10 steps from where we keep the boats to the water, and I can paddle right from there. When the tide is low I have to carry the boat a ways down the beach to a cut in the reef to get out, but at high tide if I can get through the surf I can go straight out. 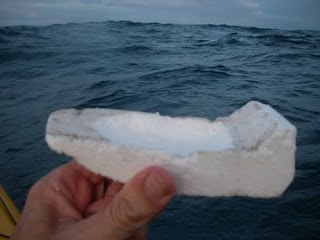 I just went down the coast for about 45 minutes. I found a little kid’s toy that had been carved out of a piece of Styrofoam. This is the second one of these I have found here, and there is very little trash, so it must be a common thing.

There are people living all along the coast. I saw some flags posted on the beach where I turned around. These look like what I have seen in the past where a section of the beach is marked as a sacred area, where people can’t go, or more commonly where only men can go. There is no sign just a couple of flags marking off sections of the beach. You are supposed to know, and the only way is to ask a local. So if in doubt don’t go in there! 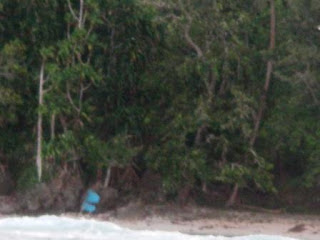 As always it was great to get back on the water after all the millions of home repairs.

Truth: If you wait something will happen.
Posted by Tim Gamble at 8:44 PM No comments: