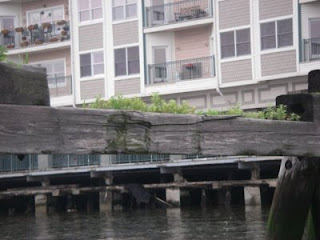 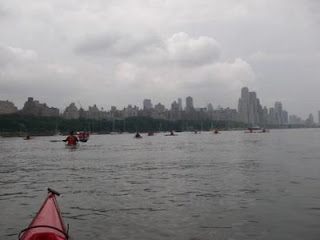 I released this message while running the morning trip for the Downtown Boathouse. The Boathouse trips started the day before. It was still a little overcast and funky looking after the previous night's blow-out but the weather held for the whole trip.

There were only about 10 or 12 members of the public who turned-up for the trip so we didn't have to run a lottery, and we got on the water quickly.

There was a 6:45 high tide, so we made good progress on the slowly decreasing flood after an 8:30 AM start. We crossed the river up near 90th St, and continued up the Jersey side. We made it all the way to the Mitswa Grocery Store, where everyone could go to the bathroom and grab a snack. I got some tasty cookies and snacks which I shared with the public paddlers.

I liked the funny image of weeds growing out of rotting timbers from an old pier, just in front of a new housing development.

We got started about 11:00AM for the trip home, and finished around 12:00PM under still cloudy, but not raining skies. 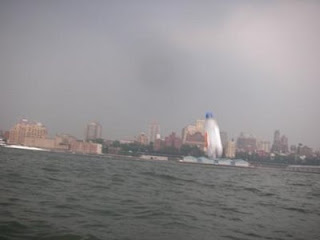 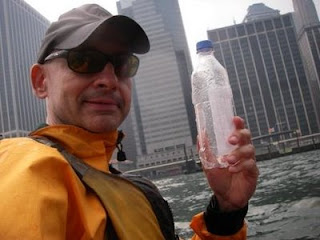 We got down to the Statue fine, and they did a bit of filming, while we watched the sky start to darken.

We could hear thunder far off in the distance so we quickly headed to Governor's Island for our 1st stop. We arrived just as the sky was looking pretty threatening and had a snack at the snack bar by the kayak launch, then watched the rain storm come in.

We didn't get back on the water until about 17:45 and headed North. We had decent current, but by the time we got near 23rd street it looked like it might dump again so we took shelter at the sea plane marina.

We ended up watching a pretty intense storm there. I kept looking at the current notations I had made, and the rain, and finally we gave-up and took cabs to collect the boats. It continued to dump rain all night.

It wasn't the spectacular Manhattan paddling experience we had promised, but at least nobody got electrocuted!!

I would hate to be the person that cut Bryan's career short, I would never pass my 5-star after a blunder like that!! 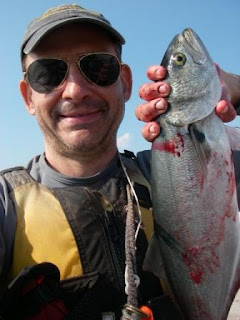 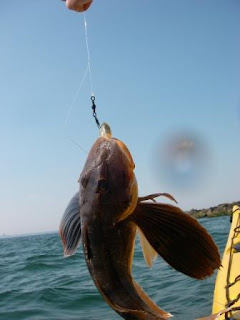 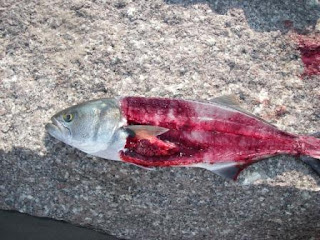 I tried to go surfing at Breezy Pt, but there wasn't enough swell to make decent waves, so I did some fishing with my handline. We launched about 3:30PM on an ebbing tide.

I caught the fish by trolling from my kayak. I am finding more and more I like fishing this way, since it involves less screwing around with the pole and reel, and just trying to use the boat to manipulate the lure.

I caught the bluefish out off the end of the jetty. I used the boat to alternately put slack in the line, then tighten it up to give the lure some life.

I filleted the fish and packed it in ice. I grilled it later the same night with a light coating of mayonaise (I learned the recipe from a former fish store owner in Florida) it was very tasty and made for a fun day of paddling, even without the surf. 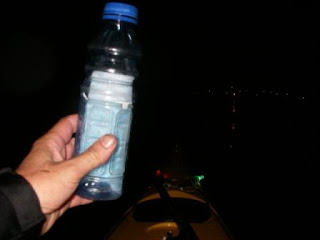 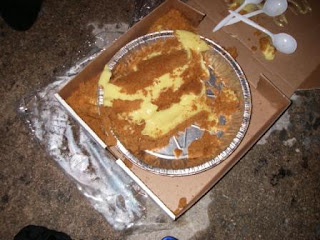 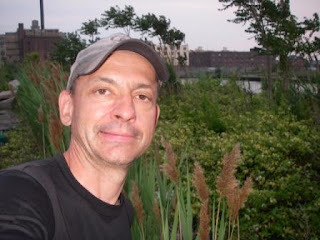 I released this message off of the mouth of the Gowanus canal late on Saturday night 6/7/08. I paddled down to some abandoned piers to have a picnic with some friends after spending the day doing volunteer work for the Red Hook Boaters in Red Hook. It was brutally hot all day, but cooled off after it rained later in the evening.

We made a charcoal fire and grilled some sausages, corn, and then ate a Key Lime Pie from Steve's Key Lime pie. This is a neat forgotten spot in the Harbor, and hopefully we can enjoy it for a few more years until they build high-priced housing on it. We often find old bottles and pottery here from the pier's previous use in the late 1800s, and early 1900s.

There is a lot of trees and plant life growing in the cracks in the pavement, and even on topsoil that is forming on the cement. Sections of it are lined with honey suckle plants, see the picture above over my left shoulder.

Just after sunset we saw a big storm blowing in. We huddled down in the crevices while it blew over and cooled us off, then finished up the bourbon and headed home. I didn't get back to the pier until almost midnight.

Truth:
It's cooler at night. 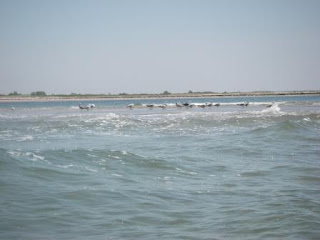 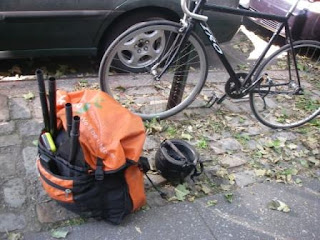 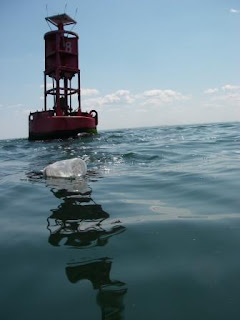 I went paddling on 6/1/2008, but it was in the river and I was too busy doing dtbh stuff to do a message in a bottle.... Today 6/2 I went surfing out on Breezy Point. I rode my bike over to my friend's house and he drove. This was a very long bike ride from Greenpoint to Park Slope with a very heavy bag on my back. I was pooped by the time I got there. We launched from Plum Beach around 11:30, and got out to the sandbar around 12:15. The water was very low, but low water for the Battery wasn't until 13:40. The low water there must be about 1 hour ahead of the Battery. There were sea gulls standing on the spot where we usually surf about 500 yards from the beach off the breakwater.

For Surfing it seems like the best on a medium to light day is a bit earlier, say 2 to 3 hours before low water at the Battery. Truth: Vacation Houses are a state of mind.

There wasn't much swell, but the current was still running out so it caused some decent waves to build up. We caught a number of them, and surfed for over an hour before the water got too high and the waves got too irregular to catch easily.

I only got knocked over once, and that was because I was screwing around trying to ride a wave to the absolute end, and I tripped over the paddle.
Posted by Tim Gamble at 10:48 PM No comments: