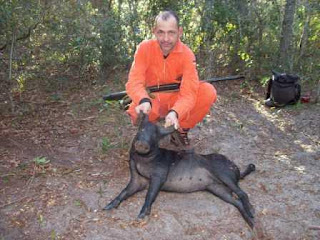 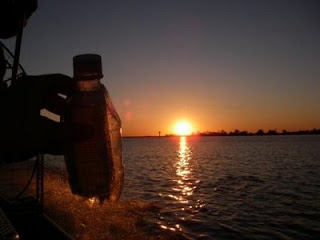 Released this message near the entrance to the Suwannee River in Florida.

I was on a hunting trip for wild hogs and deer. It was muzzleloader season, and I was using my new gun. It was cold and windy, which made hearing the hogs difficult, but we did get on small hog on the first day.

This is a beautiful part of the Florida, and most of it, even outside the refuge is still undeveloped.

Truth: wearing a hat will make you warmer.
Posted by Tim Gamble at 6:28 PM No comments: 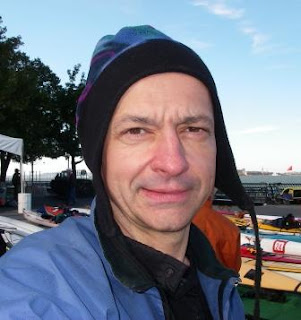 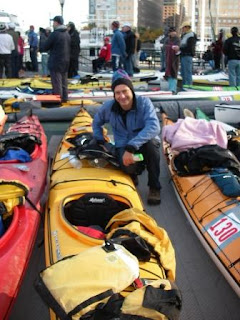 This was the second time I was doing the Mayor’s Cup Kayak race.

I decided to do something different and paddle help the Achilies Track Club by paddling with some handicapped people in a double.

I did the training the day before and met my fellow paddler, a very determined woman who had MS and really really wanted to win. During the practice we check out the other paddlers, and we looked pretty good up against them. There was one injured veteran who looked very strong, said he knew how to kayak, but wasn’t practicing.

Race day it was very windy directly from the North, I knew it would be pretty choppy, especially when the current picked up around noon. We started very early at 10:30, well ahead of the other, classes.

Once we got out of the harbor, it was indeed pretty rough, and the big plastic boat was indeed a piece of crap and really slow. The Marine I was worried about was paired with a very fast looking paddle with a wing, in a seda double. They basically disappeared as soon was started, in an hour I couldn’t even see their safety boat.

I had trouble paddling at “full speed” because the boat was so heavy I couldn’t paddle at my usual racing stroke rate, and felt like I was muscling it too much with my arms and big slow heavy strokes, not what I wanted to do. The rudder pedals also killed me because my stroke has a huge amount of foot pressure to it, and I basically couldn’t use any or the boat would turn because I moved the rudder.

My boat mate was a real trooper, and just kept paddling throughout the whole thing. At times she really got dumped on by the water.

We were neck and neck with one other boat in our class, who I found out later had a world class whitewater paddler in the stern, but she was a very small woman, and the problems I had with the boat must have been 10 times worse for her. They edged ahead of us for a while, but then I got further out in the current, and we left them behind.

At the GW bridge people began to pass us, first a few OC2s then a friend from the DTBH.

I was getting really cold. I wasn’t wearing my pfd, and just a very light shirt and paddling jacket. I couldn’t generate enough heat from paddling because I couldn’t move fast enough in the big boat.

Just as we were about to enter the Harlem River, something I was really looking forward to since the wind would be close to with us, and it would be warm, they cancelled the race, and we had to paddle all the way back. The first bit of the return trip was against the current, and we almost capsized in the following seas until I got over near the shore.

There was a big accident at the start, and the cops forced them to stop the race. See:

It would have been a very long race, because we were so slow going up the Hudson we would have had the current against us in the Harlem, and the boat was indeed a piece of junk.

The race organizers had a really cool interactive GPS based chip system to track the race, It’s a flash application, and not perfect, but once you get it to work its really neat: