I released this message right in the middle of "The Race" near "Race Rock" Long Island in a strong ebb tide current.

We did a 3 night 4 day kayak trip from Orient Point to Point Judith.

We kept semi detailed notes on the crossing for next time.
4/4/2012 10:12 Ebb Starts at Race
We launched at 09:10, the current was already running pretty good off of Orient Point, we had to fight it a bit to get to Plumb Island, then it pushed us right along.

We arrived at Little Gull at 11:00, and the current was very strong there when we landed. We left Little Gull about 12:00.
We arrived at the very tip of Fischers/passing Race Rock at around 13:00
We took a break on a golf course arrived about 14:15 and left the beach at 15:00.
Arrived at Naptree around 16:00.

Wind was from the NW and it slowly increased throughout the day. Maybe 10Kts when we left Orient, and about 25Kts as we landed, so we got across just in time since we couldn't have made the crossing in a 25Kt wind. It was just as predicted by the weather, but the currents all seemed a bit early.

There were about 100 seals on Little Gull when we arrived. Some of them were huge, maybe 500pounds, and looked more like sealions. They were not happy about us sharing the island, and paddled around and glared at us the whole time we were there. 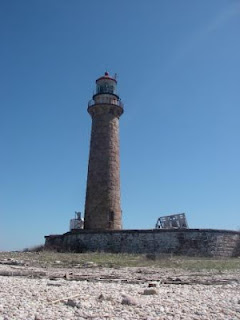 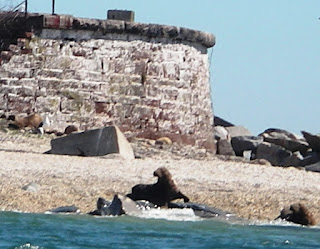 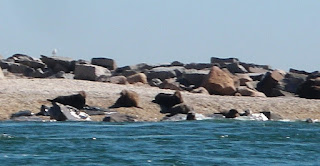 We camped on Naptree, after a lot of discussion we ended up camping near a small grove of pine trees located near a bay. We tried to be, and were very discrete. 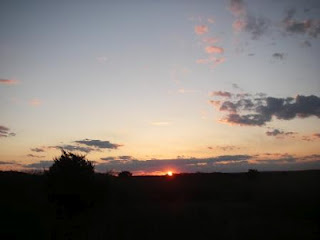 The next day we didn't get very far, between 5 and 10 miles. We stopped at a very fancy hotel in Watch Hill for lunch which was nice, but didn't add to our speed or determination to make good time. 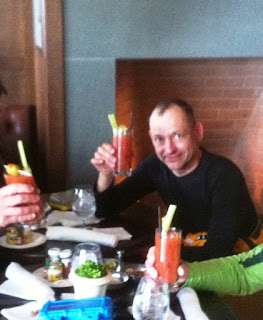 We found a park area along the coast that was fairly secluded, but did have a 4WD path between the beach and bush, so we had to hump the gear a long way to get away from it.

On Day 3 we went further down the coast. We had lunch at the Ocean Mist in Mattunick. A funny bar/restaurant that I had been to before after doing a surf class. We couldn't find anywhere good to camp around there, and went way up into the Point Judith harbor to a place called Ram Island. The campsite there was nice, but we had wade through a lot of muck to get up onto the land and climb the hill. 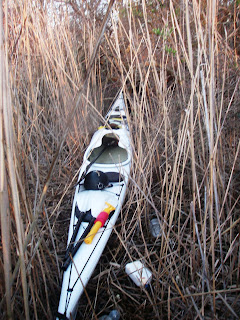 It was much colder than I had planned for, and I was cold all the time in the evenings. On the last night it was really bad, down into the 20s with ice on the boats in the morning.

Truth: You gotta learn to share.
Posted by Tim Gamble at 5:33 PM 2 comments:

Went for a short shakedown paddle before my Rhode Island Trip, and used it to reposition the boats to Red Hook for a quick departure on Wednesday.

We just paddled down to a new park they are building between the Gowanus Canal and the Owl Creek Sewage plant. It is an area I had been to before when it was just wilderness. Its always sad to see these funky hidden parts of NYC get developed, but it looks like it will be a nice park, that will hopefully include a kayak landing and some facilities so that will be good. 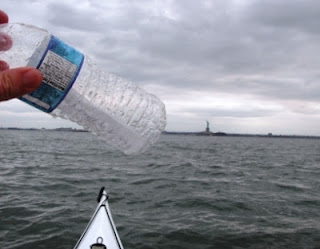 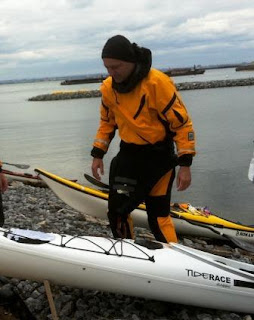 me being cold on the rocks


One of my friends found another message in a bottle from 2 little girls that had been released on January 3rd. They didn't use waterproof paper or have a great seal, but we could still read the letters. I sent them each a reply letter in the USPS mail and they replied via a comment below.

You will be pleased to know that my friends and I found your message in a bottle on April 4, 2012 in a new park that is being built in Sunset Park Brooklyn. The bottle had leaked a bit, but we were able to read the messages, and it was really fun to receive them.

I also send out messages in bottles everytime I go for a boat ride, or do anything on the water. I included pictures of your messages, and me in my blog:
www.messageinabottleproject.com

Search down through the blog for the April 1, 2012 entry that's when we found yours.

Thank you for sending the message to us.