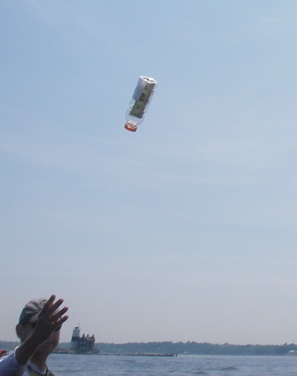 We paddled from Sea Cliff in Long Island over to David's Island off of New Rochelle. In the background of the picture you can see the light house at Execution Rocks. Execution Rocks are right in the middle of the Sound, its an old fashion light house. The sign above the door says "1867".

It was a beautiful day. Warm and sunny a light breeze from Southwest that shifted to the Southeast.

This is a great spot for paddling. The cliffs and coast along the Long Island side are pretty, and there are a number of seculded little beaches.
Posted by Tim Gamble at 3:15 PM 1 comment: 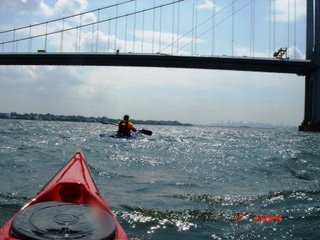 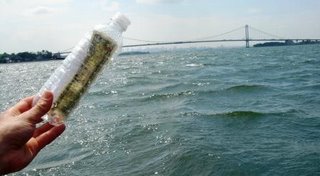 Released bottle just West of Whitestone bridge in the Bronx around 14:00. I had paddled up from Red Hook, and was trying to do a scouting trip to David's Island, but I ran out of time, and turned around before I got to City Island.

It was disappointing to travel so far, and have to turn around, but as it was I was on the water for 8 hours. The full round-trip to David's Island would have been something like 10 plus hours, or a really long day, paddling at a brisk pace with the current.

I met up with Jeremy in Long Island City. He had paddled up with the LIC Boathouse guys who were delivering their boats.

We paddled on up together under the Whitestone and then the Throgs Neck Bridges and out into the beginning of LI Sound.

Around 13:15 I realized we didn't have enough time to make the whole trip, (I had to be back at 18:00, and Jeremy who was planning on going around Manhattan had no lights) so we turned around.

Paddled South from Pier 40 at about 18:15. Released the message just off of Ellis Island at 19:00. Although it threatened to rain and was overcast we stayed dry.

Crossed from Pier 40 and paddled South on the Jersey side of the river. We had to dodge a few ferrys, but otherwise the trip was uneventful.

It was a nice night, but a bit cool once the Sun went down.
Posted by Tim Gamble at 5:24 PM No comments: 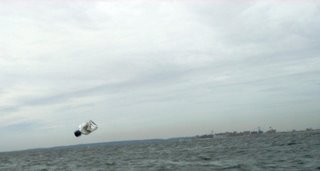 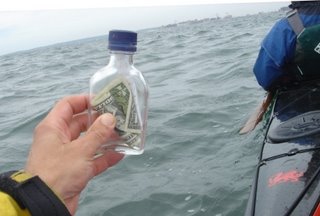 It was the final leg of our Montauk to Brooklyn Trip, and Mile's friend Geep from NJ joined us.
It was very windy 25kts, but the wind was from the east north-east so it helped us along in the paddle.The surf on the beach was small, so we were able to launch without too much trouble. Because of the wind we made great time down the Rockaway beach. There was some big swell, so some of the waves were breaking outin the sea because of the wind, but it wasn't too bad, and we even did a bit of surfing.

We went past coney island, had a snack a "voodo beach" under the Verazano, and rode the tide on intoBrooklyn, ending up right near my house in Brooklyn.

Miles car broke down on Ocean Parkway, so the only towing that was required was to tow his car back to his house with my car.

The land in the background of the pictures is Coney Island. Because we are in the lee of the breakwater you can't see the surf or the swell, but it was substantial... 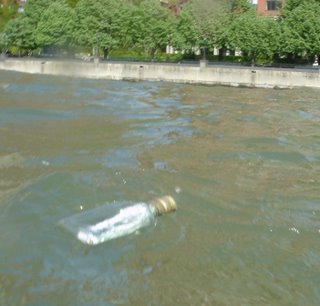 Released this bottle in the Hudson River near Battery Park City around 15:30.

I was kayak fishing and paddling on a really nice spring day.

I tried to go uptown and meet a friend, but got stuck trying to pass the cruise ship terminal, so I turned around and went home. 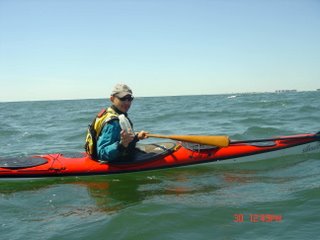 Released this message in the channel between Rockaway Island and Long Beach Island.

I was continuing my Montauk to Brooklyn paddle with Miles. The day started bad when we didn't secure my boat and dropped on the Belt Parkway at 60MPH, but it actually got worse....

Our plan was to launch from Long Beach and continue on to Pumb beach. There was a nice East wind of 5-10kts, it was bright and sunny. The forcast was for large swell, and we saw a lot of surfers when we started.

The surf was substantial on the launch, but the sets were spaced out enough that we were able to get out ok without incident. We made great progress with the aid of the wind. The swell was large, but not steep and coming from the South East, so we couldn't really surf on it.

We released the bottle around 12:45, and continued paddling up the coast along Rockaway.

Around 14:00 we decided to go in for lunch. This turned out to be a bad decision. We could see a large surf break, but the tide was fairly low, and the waves were breaking on the bar, not dumping on the beach. As we got closer and closer to shore, I realized the large swell was creating very large waves. I didn't even have time to put my sunglasses away, but managed to tuck my hat into my pfd as I eased closer.

I waited until a large swell passed under me, then tried to paddle in along the back side of it. It quickly sped up as it hit the sandbar and I paddled through the foam. I was paddling as hard as I could trying to beat the next big wave, but I looked over my shoulder and saw that another really large wave was coming and going to break soon.

The wave picked up the back of my boat and drove the bow straight down into the sand. It then lifted the stern up and I did a complete endo with the bow in the sand. After which I got a through thrashing in the surf, but finally managed to roll-up, losing yet another pair of sunglasses.

I was violently side surfed and tossed around into the beach. When I finally reached the beach I ended-up coming in backwards, but really glad to be ashore.

Miles also had a difficult landing.

After the helicopters and Fire Department left, thanks to some kind bystander who thought if we were out in the surf we must be crazy and in trouble, We ate a quick lunch. I was cold and a little dishelved from a leaking drysuit, but Miles was itching to get back in the water. He wouldn't even sit down to eat his lunch, the large surf just made him angry.

Miles launched first, but could not get through the surf. He tried several times but couldn't break through the large break. The waves were very close together, on 5 or 6 seconds between them, and too large to paddle through when they were breaking. Some of the big ones were huge. At Long Beach I saw 6ft tall men surfing down the side of them with water above and below them, and we made it through that break.

We waited a bit longer, but the surf didn't get any smaller. I then went first the next time. I punched through the secondary break, waited a bit and then took a shot. For a moment it looked like I was going to make it. I paddled through some foam and thought maybe I could beat the next wave before it broke. Unfortunately a huge wave did break right on top of me. I immediately flipped and was bounced all around. After rolling up I shakily returned to the beach.

After some more discussions I had the bright idea to paddle down in between the outer break and the beach. Miles joined me and we tried this. I was mentally very difficult to be just in the right spot. After a few minutes I got too close to the second break on the shore side, and was surged sideways into the beach. Even through it was the second break the wave was fairly large and I eventually dumped and was ground into the sand. I felt my paddle snap, right before the boat squashed my head in the sand. The paddle blade was broken right off of the paddle about 6 inches from the end. I then had to suffer some abuse about Euro paddle crap from Miles before he called a cab to get a lift back to my car.

So the epic continues. It looks like we can get all the way back to RedHook on the next attempt when we launch from Rockaway, surf permitting....
Posted by Tim Gamble at 1:05 PM 2 comments: 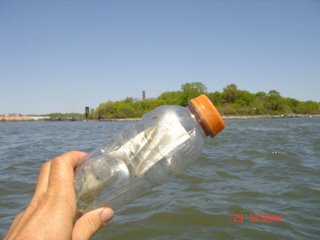 For info on the island see:
http://www.forgotten-ny.com/YOU'D%20NEVER%20BELIEVE/brothers/brothers.html

It was a lovely spring day. I kayaked up the day before and was returning home when I released the bottle.

I had a nice ride in the current and got back to RedHook Brooklyn in about 2 hours.

Saw some nice standing waves in Hell Gate, and tried to surf them a little bit, but the waves were not well defined or stationary and it was hard to stay on them.

There were a number of guys fly fishing along the eddy line under the Triboro Bridge, but I didn't see them catch anything, and I was moving too fast to talk to them.

When I got back to Brooklyn I saw the Queen Mary 2 tied-up at the cruise ship terminal in the Buttermilk Channel.
Posted by Tim Gamble at 12:51 PM No comments: