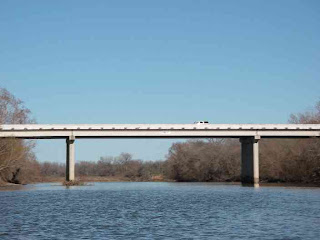 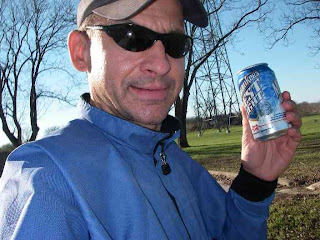 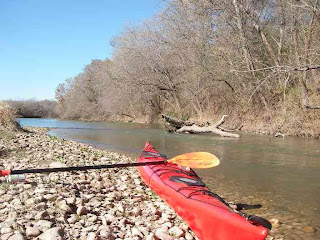 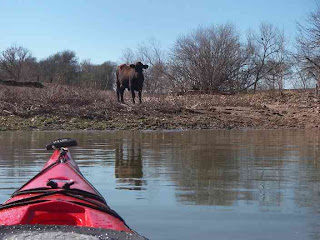 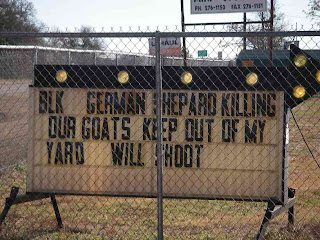 Released this message on the Colorado River in Utley Texas.

I was visiting Relatives and I rented a kayak to do a trip on a local river.


All the rivers in this area, hill country outside of Austin, are controlled by dams. The state water control authority maintains a paddling trail and map. See http://www.lcra.org
I put in at the second entry at Webberville, what the locals call "new park". It was a 12 mile paddle down the river. Even though it had been raining earlier in the week, the water was pretty low because they weren't letting much out of the dam. There was a light current going with me down the river, at a few points where the river narrowed or got really shallow the current would pick up to a knot or two, but most of the time it was insignificant.


Apparently the river goes all the way to the Gulf of Mexico. This looks like it would be a great multi-day trip to do sometime when there was more flow. The land along the banks is private, but there are some islands where camping is allowed, or at least let to happen.


I went through a number of farms, and saw cows. I think that is the first time I've ever seen a cow from my kayak. There were pecan orchards, but much of the land was fairly wild.
In the summer or spring it must be very beautiful, but this time of year the leaves were off the trees.


There were lots of ducks on the water, and I saw a man and his son hunting them at one point. Fortunately they were just setting out the decoys when I arrived, not actively hunting.

When I went around one bend I saw a large coyote drinking on the bank. I also saw lots of herons, hawks, and a variety of other birds.


In a few spots the water was so shallow I had to push the boat with my hands, but I never had to get out. I did the 12 miles in 3 hours 45 minutes, with about a 1/2 hour break for lunch. I had rented a Wilderness systems tempest 165. I was pleasantly surprised it had a very low volume, and fit me well. The wouldn't rent me a spray skirt, so I didn't get a chance to edge it, but for a plastic boat it seems really nice. It has a skeg and day hatch. I'd love to try it in the ocean.


When I got to the end there were some locals having beers under the Bridge, see the picture above. They were a fun group, and gave me a beer after I showed them how to use the CD player they had received for Christmas.

I was visiting family in Austin Texas for the Holidays and decided to rent a kayak to take a trip down the Colorado River that runs through the Texas Hill Country.

All of the water in this area of Texas is controlled by a series of dams. The dams serve 3 purposes, flood control, drinking and irrigation water, and electricity generation. A side effect is a long series of contiguous water running for hundreds of miles all the way to the Gulf of Mexico.

The public agency that manages the dams is called the Lower Colorado River Authority. Their very complete website, http://www.lcra.org/, contains directions for ordering a paddling guide. I didn’t have a copy, but there was a nice a map at the put-in.
{picture full_map.jpg}

I decided to just do a day paddle with a rented kayak. The first surprise was at the kayak rental company in Austin. After talking to a few of them I settled on Austin Canoe and Kayak, http://www.austinkayak.com/. They had a wide variety of recreational boats, that were not suited to serious paddling, but they did have one sea kayak, A Wilderness Systems Tempest 160, for sale. Since it was winter, and very slow I convinced the bored owner to rent it to me. He just took the price-tag off, I paid him $35, signed their waiver, he gave me a PFD and a paddle and I was on my way. They didn’t look at my license or take a credit card imprint. I guess they didn’t realize I was from New York. It probably had something to do with the pick-up truck I had borrowed from my brother that had Texas farm plates on it.

I drove south of town to the put in. This is farm country in Texas, and fairly rural. The sign at the business near the park summed-up the local people’s attitude about how to handle problems with their neighbors.
{picture warn_sign.jpg}

I launched at the Big Webberville Park. One concern was that I wouldn’t be able to get through because no much water was being released from the dams, and it hadn’t rained much.  I talked to a couple of fishermen who had a small motorboat, and they told me there was plenty of water all the way to the bridge at Farm Road 969 where I planned to take out. There were a few shallow spots where the boat rubbed on the bottom, but I didn’t have to get out.

It was a quiet lazy paddle. In the summer it is probably very beautiful, but it was a little barren because all the leaves were off the trees. I went through a number of farms, and when I rounded one corner I was face to face with a big cow. It seemed odd after all the ocean paddling I have done to be starring at a huge cow right in front of my boat.
{picture cow.jpg}

I saw a variety of real wildlife, great blue herons, ducks, hawks, turtles, and even a large coyote. The ducks and coyote were the most skittish, probably because both of these animals are often shot by the local people. The ducks are hunted for sport, the coyotes are killed because they are a threat to farm animals.
{picture hawk_sit.jpg, turtle.jpg}

I continued to paddle down the river. Numerous warning signs indicated that all the land was private and posted, but there are a number of sandbars on the river that are suitable for rest stops or even camping on longer trips. I had lunch on a gravel bar.
{picture lunch_bar.jpg}

I only saw a few people over the entire 4 hour trip. There was a man and his son putting out decoys for duck hunting. I was glad that they were just getting set-up, since every time I rounded a corner I flushed a flock of  ducks into the air from the water.

When I reached the take-out I encountered a group of local people who had set-up a card table and were drinking beer and bourbon. I chatted with them for a little while, and helped them figure out how to work their new CD player. They  thanked me with a beer. When my brother came to pick me up the locals greeted him. He had picked up some other friends in a canoe during the summer, and this same group was sitting and drinking in the same spot. They thought it was last week, but my brother assured them it had been 6 months ago.

This area is subject to large floods. In 1991 the water over ran the dams and the authority lost control of the river. The water flooded all the way to the bottom of the roadway on the bridge. A small marker in the pavement indicated the high water mark.

All in all it was a fun, and very different paddle. I’d love to come back in the spring when the water is a little higher and faster, and go all the way to the Gulf of Mexico, 300 miles, camping along the way.

Posted by Tim Gamble at 1:14 PM No comments: 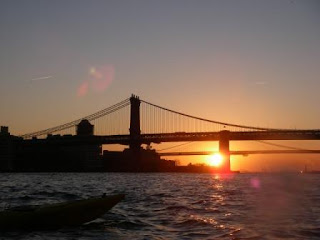 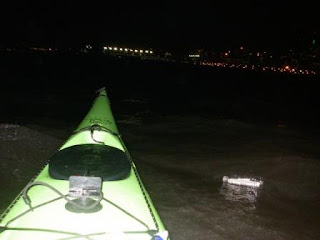 Did a circumnavigation of Manhattan for the New York Kayak Company.

We planned to leave at 08:00 AM and do the traditional counterclockwise paddle route. High water at the Battery was at 08:40, low water at 15:20. Since it was a fast group we would have paddled against the current down to the Battery, then had the current the whole rest of the way. Wind was from the Southwest at 15kts.

There were problems getting underway, so we weren't able to leave until 09:30. Based on the currents we decided to instead attempt a clockwise route, up the Hudson, Down the East River. The conditions weren't too bad, but the rear quartering wind made for a lot of weathercocking. My skeg was not working, so it was a bit of a workout. We arrived at Spitendival around 11:30, had a quick lunch, and were back underway down the Harlem by 12:00. The Harlem paddle was difficult, against both the current and the wind.

We arrived at Randalls Island around 14:15 for a short break, and were back on the water headed down the East River by 14:30.

The East River paddle against the wind was also very slow going. The current was stronger up near Rosevelt Island, but there was virtually no current assist by the time we reached 23rd St, and near the Battery the wind was stronger than the current. We did get to see a dramatic sunset behind the Brooklyn Bridge. I was peddling over the bridge in the morning, so it seemed fitting that we paddled under in just as the sun was setting.

There was very heavy ferry traffic all around the Battery, and the swell was about 4ft when we turned into the Hudson. We stopped at North Cove around 17:30. It was very dark by then so we got some lights and then continued onto the Kayak shop by 18:30.

Truth: Most tasks take longer than you expect them to.

Posted by Tim Gamble at 3:06 PM No comments: 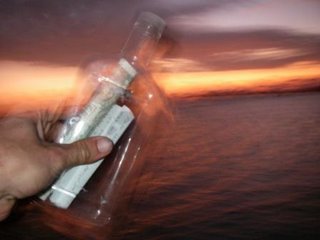 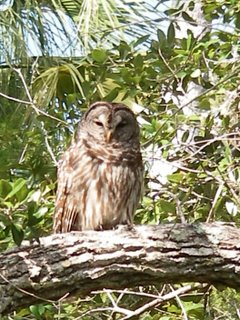 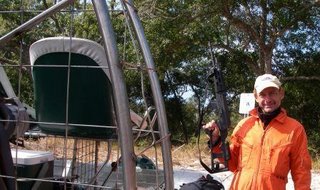 Released this message while Hog Hunting in the Suwannee River National Wildlife Refuge. The score was Hunters 0 Hogs 3. We didn't see a single one so we went home hungry.
The weather was cold in the morning, but really nice, warm and sunny in the afternoons. I released the bottle just as the sun was setting in mouth of the river from the airboat, as we were coming home on the last day. Since we usually hunt from Sun-up to Sun-Set. Just stunning scenry.
One morning while sitting in a tree waiting to kill something the Owl pictured above landed on a nearby limb. It was daytime, but he seemed really sleepy. He just sat there for an hour or so, and didn't even fly away when I climbed down for lunch.
Posted by Tim Gamble at 7:25 PM 1 comment: