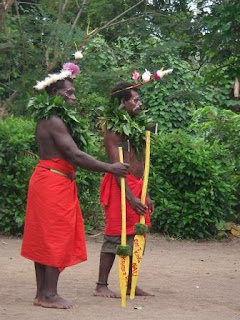 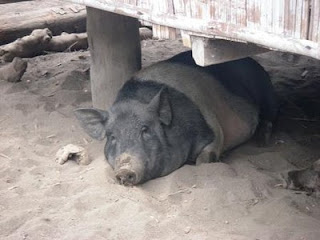 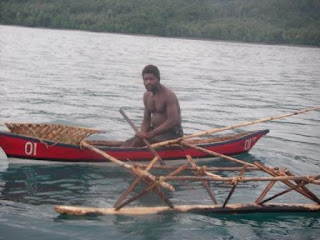 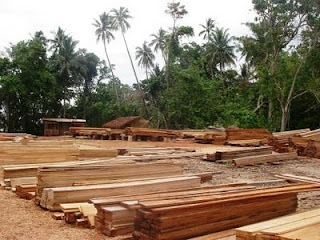 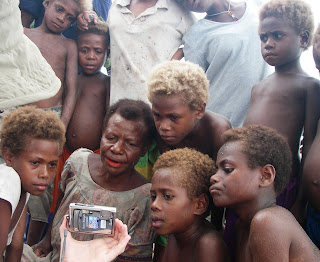 -Klingon the pig as a grown-up. I had a dream about a pig before I moved here, and I have been looking for a black-white-black pig with these colors.

-The pagan dancers for Easter.

-A lumber camp on the side or the road. They take the good logs away, but the junky ones get processed here by a small portable sawmill.

-Kate showing people their pictures that she took.

-A canoe on the water. These guys were all out trying a new fishing technique.

It took all week to get out kayaking, but I finally did on Friday afternoon.

I just took a slow lap around , and paddled out to the point where our new house will be, if it becomes our new house. Not much has happened on that front in over a month, so we are disappointed. It was looking really good there for a while, then progress slowed to a crawl and stopped. We spoke to the landlord earlier this week, and she is still waiting on the carpenters to do more work on the kitchen. She was upset that they weren’t working so it still seems to be a go…

It was very calm on this day, a small surf break, but the tide was way out so it was not safe to surf at all. From talking to the board surfers it seems high tide is the best time because there is the most water over the rocks then.

I saw a stand-up paddle boarder from Nusa. One of the guys out there has offered to let me try it, so I have to go back when I have more time.

We had a rough weekend trying to have a vacation trip over Easter. We took a trip “down the highway”, which is what everybody says when they go out of Kavieng. There is only one highway, and only one direction to go, so that is actually pretty descriptive. It turned into a highway to hell trip.

We met a guy at Nago Island a month or so ago who told us fantastic stories about Japanese WWII planes crashed in the jungle near his wife’s village at the other end of the island and he offered to take us down there on a sightseeing trip, so we decided to take the plunge and do it.

It was 12 hour drive each way. The highway got smaller and smaller turning to a crushed coral road, and eventually just 2 tire tracks in the dirt. At many places we had to drive through rivers because there were no bridges.

We got all the way down there and then we had all kinds of problems with the local people. Our guide had not told them we were coming, and he didn’t have the right people lined-up to take us up into the woods. It is actually difficult to get this kind of message sent because it is basically a game of telephone. The cellphones don’t work in this area, so to send a message he needs to find someone who is headed to that village, and ask them to give the people there a message.

At any rate we spent the first morning going from village to village via boat, trying to arrange a local guide. At one village the chiefs couldn’t agree to let us go onto their land, or that’s what we think happened anyway; at another the people who knew the way had all gone for the day, etc etc… Eventually we ended up in a place called “Moricon”, by the end of the trip I was calling it “Mordor”….

A bunch of young local guys came with us, to help guide us, and help us with our equipment. We weren’t that worried about actually finding the plane, and decided that we didn’t care if they couldn’t find it, but we wanted to camp up in the jungle for the night. We hiked 4 hours up a river bed and they showed us a rusty piece of metal that didn’t look like anything that came off a plane.

It took us a while to realize it, but there was then a big disagreement with our guide and the local people, and it turned out they didn’t want to let us stay in jungle for the night. We tried arguing the point, but the guy who was carrying the water had already dumped 90% of it out, so we were kind of screwed. It is very very hot, and you can’t live without water. This trail was high-up the side of a mountain, and there was no water available to purify, so we had to go back.

There were a series of other setbacks and problems, the worst being that the next day we found out they had stolen things out of our bags when carrying them. We were forced to hire some of the local guys to carry our stuff, and we often got separated from them on the path. It was impressive to watch these young guys with bare feet, briskly hiking up over tree roots and rocks with very heavy packs. They went much much faster than we could. We couldn’t come close to keeping up with them.

We were angry and upset, and didn’t really trust them the next day when an alternate hike was proposed, so we spent the day in their village. It was Easter Sunday and they did a church service/sing-sing to celebrate.

We met a bunch of guys fishing from outrigger canoes. They were trying a new kind of deepwater fishing using a really long line with multiple hooks. One guy had learned it at a local training session, and he was teaching all the others.

We chatted with them for a while, and eventually bought one of their canoes to take home with us. We now have another boat to paddle!

A sing-sing is their traditional dance performance. I have seen a couple of them now, but this was the first one that was tied to a Christian religious ceremony. About ½ way through Easter service a bunch of guys come out of the woods doing a traditional dance and chanting. They make little wood ceremonial staves to use during the dance. These were interesting they were canoe paddles on one side, and axes on the other. The axe or machete is never far away in all their decorations at these things.

Since it was Easter the axe paddles are painted with Christian slogans “Em Nau King of Kings” or “Jeru - salam” or “Hapy Aister”. You can see in one pictures the guys have made little wood knives, with crosses cut in them, and a kid behind is carrying a bible, while the dance across the sand, doing a pagan dance, and enter the Church. It is a funny mix of different belief systems, but they seemed to have something for everyone.

Anyway we still haven’t managed to go camping, but we did get to see the jungle along with getting jerked around and ripped off, so it was an expensive and painful walk in the woods.

Posted by Tim Gamble at 3:03 PM No comments: 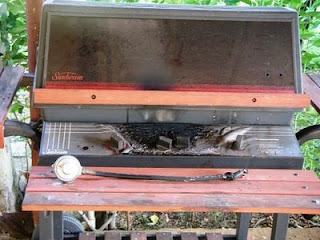 Email to my friend who gave me the grill in question.

So Kate and I come back from a very difficult Easter weekend where a holiday went a bit out of control, and then there is a blackout in town.

The problem turns out to be the fact that the power company didn't pay the bill to fuel supplier and they cut them off. The power company was actually telling people this as their excuse.

I found some expensive organic beef in one of the supermarkets that I was saving in the freezer. If your house is over 95 degrees and the power goes out on your fridge for 16 hours you have a problem. I think, Ha no problem. We will have a nogat power party. (nogat means no in tok pisin).

So we have some people over and I get the food ready by flashlight. I light the grill and go back upstairs to have a beer and entertain the guests while the grill "warms" up. Well into my beer I notice an orange light from the front of the house. I actually thought the power had gone back on. Hmm... A sarcastic Australian surfer says "maybe your house is on fire Ha Ha..."

Anyway the power wasn't back on, but the grill had caught fire. It burned off the fitting where the gas goes in the grill and I had a homemade flamethrower shooting huge flames onto the side of the house, this was turning into a "nogood" party....

I managed to turn the gas off, but I think the grill is going to need some work. I guess I'll give them a call, but this looks worse than when the glass broke when you owned it.

I thought you would appreciate this picture Notice both burners are at FULL THROTTLE....
Posted by Tim Gamble at 2:56 PM No comments: