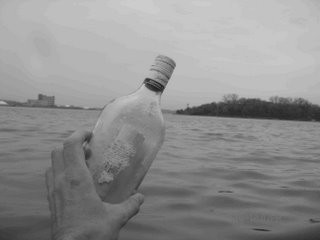 Released the bottle off of North Brother Island around 13:00.


It was a rainy Saturday. I paddled up to the Bronx River from Red Hook in Brooklyn. I had the tide with me both ways, and it only took about 2 hours to get up to NBI.

After releasing the bottle I paddled further north, and up the Bronx river for a little while. I stopped when I got to very dirty oily boom about 1 mile into the river.

On the way back downtown there were some very interesting whirlpools in Hell's Gate. I stopped at 23rd St at the Waterside Plaza and walked over and went shopping at the Farmer's Market in Union Square.
Posted by Tim Gamble at 2:07 PM No comments: 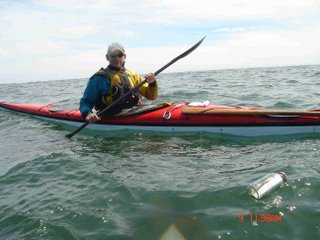 Released this message off of the Channel between Robert Moses State Park and Jones beach as we proceeded on our Montauk to Brooklyn paddle. It was a bright beautiful spring day. Released it at 12:38 (the time is wrong on my camera)

We had a 5-10kt tailwind from the south east and were slightly assisted in our paddling by being able to surf gentle swells.

The tide was still ebbing out of the inlet, and it wasn't clear if the bottle was going to be taken further out the sea or down the coast.
Posted by Tim Gamble at 7:37 AM 1 comment:

Released this bottle off fire island around 12:00. We were doing a 20 mile paddle from the center of Fire Island to Robert Moses State Park.

Its a very desolate section of beach, because its part of a large state park. There was a 10kt NE wind all day, and a substantial swell, but it was a beautiful clear blue spring day.
Posted by Tim Gamble at 12:49 PM No comments: 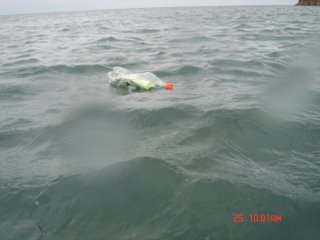 Released this message in France near Ile De BreHat. I was taking a BCU 5 star training class. It was a gray windy day. We were doing navigation exercises around the island, but I snuck away for a few minutes to send this bottle on it's way. I included an Island of Jersey 1 pound note.
Posted by Tim Gamble at 12:37 PM No comments: 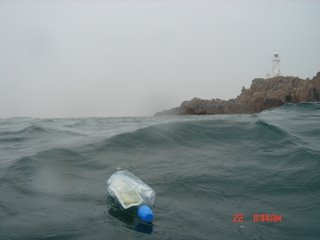 Released off of Island of Jersey in the English Channel. I added A one pound note to attract extra attention.

It was a windy day, but not msuch swell. The island is very beautiful, lots of steep rock cliffs, caves, etc etc...

I let the bottle go in the wind right near the lightouse, in a strong current and wind, hopfully it traveled a long way.
Posted by Tim Gamble at 11:57 AM No comments: 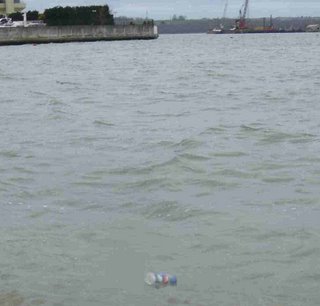 Released this bottle in the Harbor at the mouth of the River Medway in England.
I was paddling with a friend from London.

We paddled out into the wind, avoiding the oil tankers. There are some interesting old fortifications, but otherwise the area is very bleak and forbidding, lots of industry and dirty water.
Posted by Tim Gamble at 11:47 AM 1 comment: 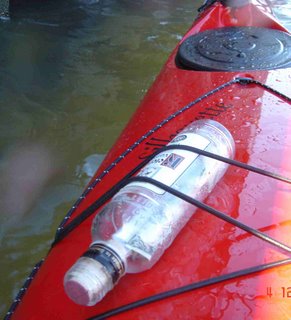 Released off of Red Hook Brooklyn near my house around 14:00. It was a very very windy day, at least 30 kts from the West. I wanted to paddle up the Hudson and meet some friends but the wind was too strong.

Instead I paddled over and spent some time exploring Erie Basin.

I found a really interesting old bottle in the Sand that said:
"CP Kattenhorn 32 Conover St." It must have been an old Beer or soda company.

Later I went by this address, but its an apartment building now.

I found the following link referring to this family living at this address in the 19th century:


And a record of one of the family dying:

Released the bottle in the Hudson River at about 80th St at 13:30. It was a a clear sunny day, the temperature was about 40 degrees, there was a West wind of about 10kts.

We paddled from Pier 96, up to Mitswa to have lunch and back again.

I actually found the bottle in the river again on the way back, it was being held in place by the competing wind and current. I let it go again, futher to the West hoping that the wind would not bring it back to the Eastern shore.
Posted by Tim Gamble at 11:12 AM No comments: