Went to try Freediving at Atlantic Beach bridge between Rockaway inlet and Long Beach Island. Released Bottle around 18:00, just at the end of the flood tide.

The diving here is ok. Visibility about 10ft, but got worse as the tide turned. I went in the water around 17:30 and the water was still moving in. It had turned and was going out by 19:00 when I got out. Couldn't find tides for bridge, but East Rockaway Inlet is probably close. The high here was at 18:02, that seemed to be about what I saw.

Put the following saying on the note:
"Its often worth it to try something dangerous or difficult. You will always feel more alive afterwards."
Posted by Tim Gamble at 10:45 PM No comments: 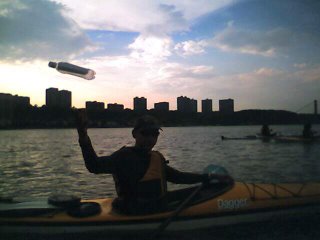 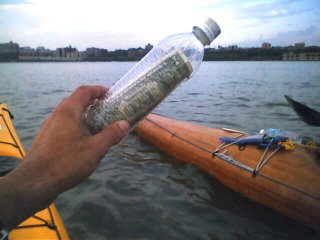 Paddled up the Hudson River, and released the bottle at about 140th St around 19:00.

We were having a kayak cookout at the Park up under tha Palisades. This is a great spot, and although the party ran a little late it was a lot of fun.

In case its not clear my fancy camera has broken, so I have been reduced to taking cellphone pictures if nobody else on the trip has a real camera.

I have gotten some flak that the messages need to be more interesting. One friend suggested poetry, but I don't think I'm up to that. Another suggestion, actually it was my wacky idea, was to put disturbing fortunes in them eg. "The person who opened this bottle will be dead within 1 year" that sort of thing. Instead I have settled for indisputable truths, or important anecdotes that will fit on the small space.

On this note I wrote:

Hopefully I didn't accidently plagurize that from a song...

Posted by Tim Gamble at 1:41 PM No comments: 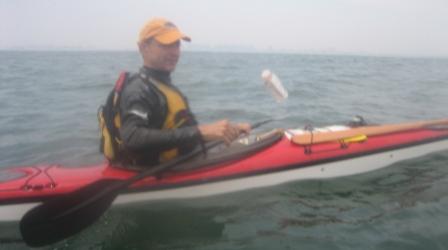 Paddled from Plumb Beach out to Breezy Point to play in surf, and meet some new paddlers.

There wasn't much of a beak on the sandbar, and it was too disorganized for any real surfing, but we got battered around a little bit. Tried mind altering substances to make surf bigger, but the tide rose and rough water disappeared completely.

Posted by Tim Gamble at 1:35 PM No comments:

We were doing one of four trips to GI this summer. It was a hectic trip because it was so large and we had a long way to go. 24 boats total.

Great trip and great group. We left around 9:00, paddled down and picked up a few more paddlers at pier 40. We circumnavigated Gov Island and arrived right at 11:00. They gave us water, a short tour, and let us use the Restrooms. Started for home about 12:30 and arrived back at Pier 96 at 14:00
Posted by Tim Gamble at 1:04 PM No comments: 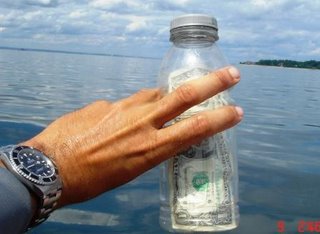 Paddled From Manorhaven in Long Island to Orchard Beach via Hart Island.

It took a while to find a launch spot. The original plan was to launch out on the tip of Sands Point, but it was all mansions and private. A jogger pointed me to the town park in Manorhaven. I paid the $10 resident fee to park and launch.

It was a beautiful day after a steady week of cloudy weather and rain.Sunny, and very little wind. The Sound was completely flat, when I launched at about 10:00. You could have water skied on it. It reminded me of when I was a kid and we would get up early and ski in the Gulf for a few hours before the wind started.

It took about an hour to cross to Hart Island. Saw lots of guys fishing, and the spooky Prison keep off signs, and Cross made of Stone. The island is run by the prison system, and they bury indigent people there, presumably with Prison labor. Must be lots of bad Vibes. The Cross on the hill is made of stone, and can be seen from a long way off. 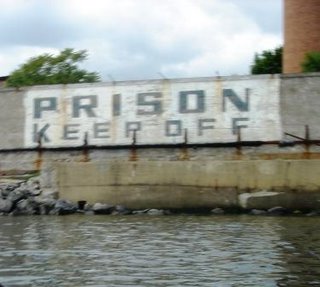 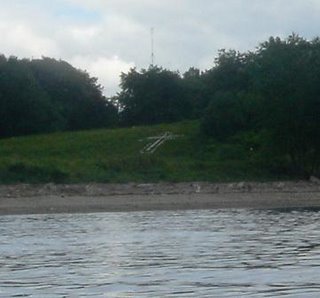 Tried to land at Orchard beach, but was shooed off. Went around back. Found official kayak launch spot, but you can't circumnavigate Hunter Island that contains the park, it has been filled in.

Released the bottle on the return trip at about 15:00. The little white speck on the LHS in the background is the excution rocks light-house. The land on the RHS is Sands Pt.