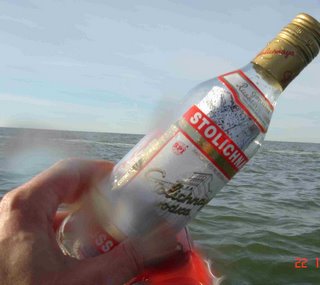 It was a clear beautiful day with a light wind from the North. There were a lot of surfers in the water dispite the cold.

Right after releasing the bottle I started finding fishing gloves in the water. I found 4 different pairs, 8 gloves total. They must have all washed off of commercial boat but it was very strange to find them one after another scattered over about 200 yards. There were some cardboard boxes and other debris, so maybe a boat had had some problems.

Posted by Tim Gamble at 7:49 PM No comments:

Report:
I was taking a freediving class with performance freedivers. It was the open water portion of the class where we practicing breath hold diving in the ocean.

The morning started calm, but there were 3ft swells by the time we had finished diving. It was sunny and 75 degrees. I caught a cold, and my sinuses were messed-up so I couldn't go very deep. It was great to be in the fairly warm and clear water for a change.

I used a plastic bottle that I found on the side of the road, and snuck it over the side as we pulled up the anchor and headed for home.
Posted by Tim Gamble at 1:54 PM No comments: 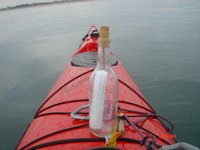 Report:
Was on the 2nd leg of our Montauk to Brooklyn Trip. It was about 35 degrees, and completely still when we launched. Since the weather was good we had planned for a long trip 23 Statue Miles down the coast.

It was a nice day of paddling, and stayed calm, but overcast for most of the day. We made good time and got back to the car just as it started raining at 16:30.


The bottle was found 3 years later, see the comment.... Here is a picture after recovery! 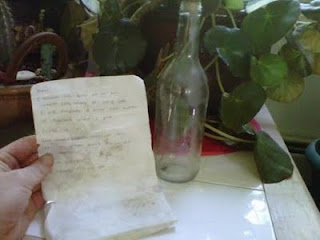 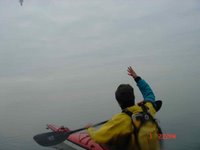 Report:
Went to the Coney Island Polar Bear event. This is the 2nd year in a row I have done this. We go and paddle and roll over with the swimmers without any of our normal protective winter clothes. It was a real adventure and a lot of fun.

There were hundreds of swimmers, but only two topless kayakers.

I released the bottle about 2 miles off of the beach later in the afternoon, around 15:00 or so, after I got dressed again.
Posted by Tim Gamble at 5:06 PM No comments: 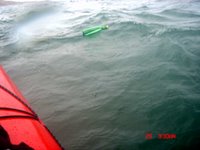 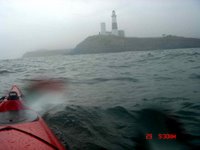 
Released this bottle as I started a multi-day trip to paddle from Montauk back to Brooklyn, in sections. It was about 40 degrees and raining. Wind was from the SW shifting to south. 10kts going up to 15kts.


We launched at the park in a sheltered area, then paddled out and release the bottle in front of the lighthouse. I capsized fooling around with the camera, because I wasn't used to the tippy shiloutte boat.
We then had an exciting paddle in steadily increasing seas. We paddled about 6 miles down the coast to the cars, then moved the cars again another 6 miles. After lunch launching was very difficult, and some of the waves were up to 6ft tall. Even about 1/2 mile off shore some of the waves were still breaking in the open ocean and deep water. I had never seen this before. We really had to pay attention. I was knocked over 3 times total during the day, and once side surfed for 30 or 40 yards by a large wave that broke outside of the sandbar.

Hi, I found your message on the beach near the Montauk Point
lighthouse on Dec. 31st.... no bottle.... just the piece of paper
lying on the rocks. Guess it didn't get very far (you wrote
that you released it on 12/29 off of Montauk). Not very
exciting... better luck next time.
Phyllis
Posted by Tim Gamble at 4:46 PM No comments: