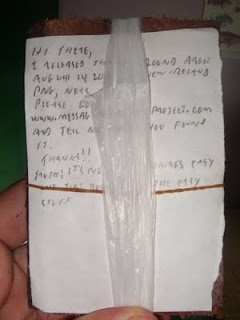 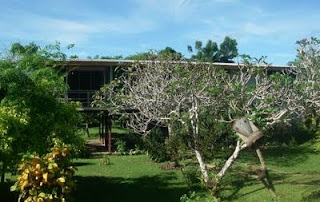 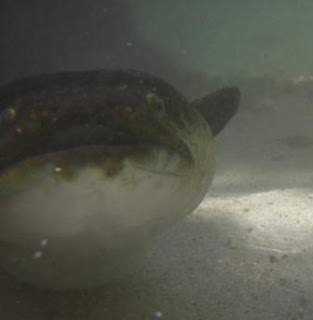 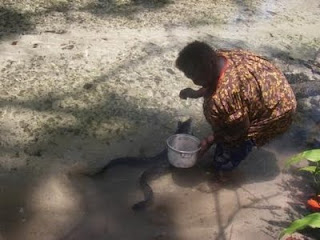 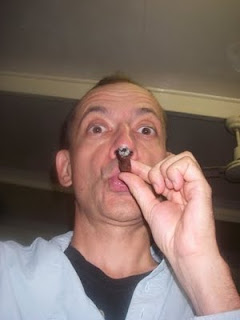 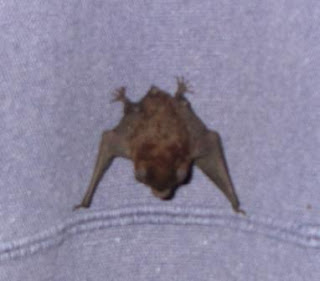 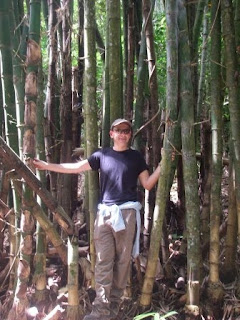 I released this message on 8/19/2009 while snorkeling in Kavieng Harbor. I still haven’t been in the water anywhere except the harbor. There are several reefs here in the harbor, but most of the coral is dead, and it is fairly silty.

I couldn’t find a bottle to put the message in, so I strapped it on a piece of wood. There aren’t many plastic bottles laying around, I think because drinks in them are expensive, and people often keep them and refill them with water for later.

After the snorkeling I had some beers on a boat with some of the people Kate works with, and some visiting researchers.

On Thursday I spent the day with these researchers. They went down the coast to look at some terrestrial sites and see if they could come back and do a detailed survey.

Much of the land along the coast has been planted with oil palms, and there is not much wild forest left. The oil palm business is bad for the environment. They spray Round-Up around the base to keep anything from growing, and use lots of fertilizer, both of which get washed into the ocean about 30 yards away from the rows and rows of palm trees. I included a video above out the truck window of one of the plantations.

We drove then hiked-up into the forest where it was much more wild and natural. I saw some interesting plants, and giant fruit bat. These bats are very funky, their bodies are about the size of a house cat, and they look pretty scary when you see them in flight, almost like a pterodactyl, or something. In Vanuatu Kate said they eat them in a French restaurant after they tart them up with a funky name like “le-fox-de-flight in orange sauce”.

One of the guys from Kate’s office told me there are bats living in the walls of the house we are in, but I haven’t seen any. I did find one in our laundry a few weeks back. I thought it was a piece of lint, but it was furry and gripping when I tried to wipe it off. Yike!!!

I did manage to find some cigars in the local market. They look funny, but burn really well, and for 20 cents a piece you can't beat the price. I am sending some back, along with some betelnut to some of my friends in NYC.

On the way down the coast we stopped to visit a woman who feeds eels for tourists. You purchase some canned fish at a store, then go to a small river. The eels are large and very tame, and swim right up to you for a feeding. We saw two medium sized ones, but before the big “King Tide” event last year there were many more.

New Ireland had a small environmental disaster last year when a period of high winds corresponded with strong tides. The water rose up and destroyed a lot of villages, and roads. It also did a lot of damage to the reef. Cathy the eel lady showed us where her house had been washed away. Apparently it destroyed the eels habitat or killed them outright, so she is starting over with a new group of eels.

She is an interesting older woman. She was convinced I looked just like “Gold Baum” from Jurassic Park. She meant Jeff Goldblum, other people have mentioned that I look like him. He and I share a birthday, only he is 10 years older:
http://www.movieeye.com/celebrity_birthdays/details/15540/Jeff_Goldblum.html

I signed her guest book. “Jeff Goldblum”. She said “Goodby Gold Baum” when we left, so I’m looking forward to visiting with her again the next time we are down that way.

Truth:
“Its not that ‘nothings easy’, we just don’t notice the easy things stuff.” 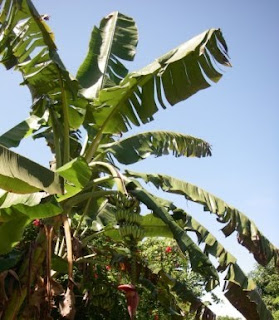 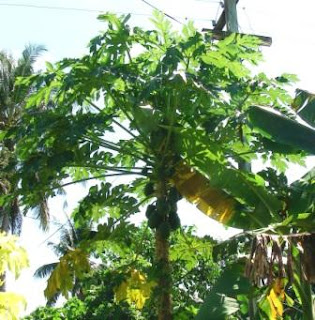 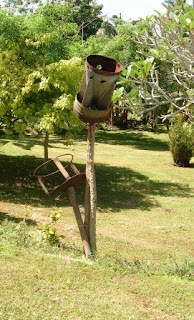 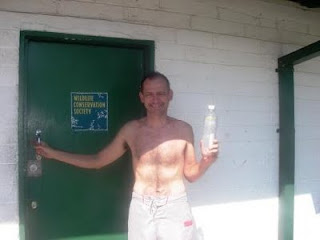 I released this message in on 8/9/2009, that August 9th, Not September 8th (They do dates backwards down here, and drive on the wrong side of the road).

Kate and I have been here for about 3 weeks, and we are more or less settled in. We have a house in town, the pictures above are from our yard, this is where we get bananas, and papayas! It’s a lot easier than going to the store. The first day we were here we asked the housekeeper how to get them down, and she chopped a banana tree down, so now we use a stick and don’t ask her because we only have about 10 of them.

The other picture from our yard is a WWII bomb casing, the yard came with a bunch of these that are used as a bbq, or are just sitting around rusting. I made a garbage holder for it. Everybody puts the garbage on poles out in the yard to keep the dogs out of it. The holder that came with our house was hit by a car, so I made this replacement. Kate doesn’t like it much, but I think she is getting used to it, and its going on 2 weeks without falling down.

We can’t quite figure out the garbage schedule. The truck didn’t come for 2 weeks, then came once last Wednesday, and again on Friday. They are probably supposed to come 2 times a month, and figured they would just get it over with.

I actually saw them on Wednesday because I was home sick. We got a couple of coconuts at the Market, and they sat around the house for a few days:

K: I don’t think we should eat these now.

T: Let’s just open it and see what it looks like.

K: Whatever I’m going to get ready for work.

T: Ha the coconut is all mine, what does she know…

T: Can you get off the phone and take me home right now!

I still don’t have an office to work in, and I’m not sure if I can find one. There are only a few places with medium speed internet dishes, Kate’s office being one of them. I’m looking into getting my own dish, or maybe convincing one of the hotels to put in a dish, and splitting it with them. The initial install is very expensive.

I’ve also been working on getting a blackberry phone with a modem. This has proved to be very difficult. The places in town don’t have it, It has to come from “The Capital”, so I had to find a guy there to sell it to me, and ship it to me. I can’t check on the status of it because the shippers website has been hacked and I get a McAfee security warning going to the shipper “TnT Shipping” website. I talked to the local guys and they told me it might be at the airport. They haven’t made a pickup from the airport in 3 or 4 days because their truck is broken down. The airport is only 5 minutes away by car. I’m hoping that the truck gets fixed next week, otherwise I’ll offer to drive them there myself.

We are having fresh Tuna again tonight for dinner. A Tuna tagging research boat came into town, and they get some extra fish that get killed and can’t be released, so they give them away. We got a yellow tail, and a skipjack. Yum….

Today was Sunday and we went to the office for a few hours, then a long snorkel from the pier in front of the office. We have been in the water a number of times here, and you can swim to reefs just 300 or 400 yards from the pier that are covered with fish and coral. A lot of the coral is dead, but there are still plenty of fish.

We have been told that there is a WWII airplane in the harbor somewhere, so we are looking forward to checking that out, but we might have to use scuba tanks, since off of the reefs the harbor is very deep.

Yesterday we snorkeled out to a resort called “Nusa” from the pier. I found a champagne bucket in the sand, that I am going to try and clean up. The champagne selection is not good at Joe Tong’s “”. I got a wicked headache from an overpriced Rosemont Shiraz I got there last night. The champagne would probably kill me.

I checked in on the New York Times today and saw that a plane crashed into the river right about when the Downtown Boathouse was running their Harrison St. Regatta. I feel kind of bad because I made the trophy for the race out of a scary skull, that is definitely in bad taste I hope you they blame me, really there was no way to predict something like that.

We have definitely been out of the news loop because the Internet is so slow.

Anyway we released the bottle in harbor around 3:00PM PNG time, that is 1:00AM EDT.

Posted by Tim Gamble at 3:16 PM No comments: