This was part of my Cape May to Brooklyn paddle. We paddled 20 statue miles from Barnagat light on Long Beach Island to Bay Head New Jersey.

We left LBI at 9:45AM. We launched from the bay side, just inside the inlet. Even though low tide was a few hours before the water was still flowing out because there must be an estuary effect like we have in the Hudson River.

It was warm about 70 degrees, but it felt much cooler on the water becasue there was a substantail south south-east wind blowing across the still very cold water.

The wind really helped us along and we made great time flying up the coast. We stopped where we found a spot of mellow surf, just north of Island Beach State park for lunch from about 13:00 to 13:30.

I released the bottle right in front of the amusement park at Seaside heights.

We made it to Bayhead by 16:00. I tried to find the take-out based on my visual clues without using the GPS and failed. I was paddling by it before Miles stopped me. 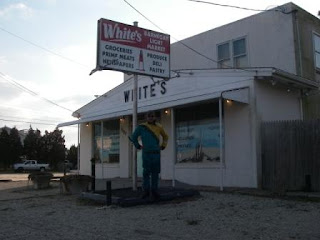 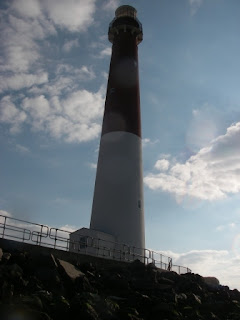 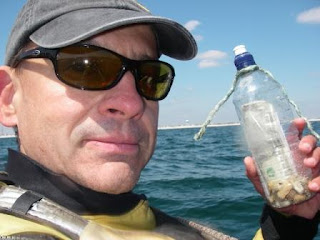 I released this message off of Long Beach Island on the Jersey Shore around 13:00 about 1 mile from shore.
I was on my Cape May to Brooklyn paddle. It was an unusually cold day for April, but it was still nice to be out on the Ocean.
We launched at Holgate around 11:00, and paddled to Barneget light, which covered the entire island. We got off the water at 17:30.
Wind was from the West about 10-15kts, but it picked-up near the end of the day. The last 1 mile was a slog against wind and current into the harbor.
It was funny to be back here after so many years. I used to vacation on this island years ago. Many things were still the same, but all the empty lots are now occupied by houses.
See Mile's trip report at:
http://www.atlanticseakayakers.org/phpBB2/viewtopic.php?t=86
Posted by Tim Gamble at 3:50 PM 2 comments:

I was doing a trip for New York Kayak Company. They had a paddler over from Sweden who wanted to go to the Statue.
It was interesting to talk with him, and find out about what they consider kayaking. They do mostly flatwater paddling, using kayaks that are like K1 racing boats with wing paddles. They are not very familiar with cold weather gear. One of his friends had just died this year from hypothermia.
It was pretty windy 15-20 kts from the West.

We paddled over to Jersey City, then south to the Statue. Like was week there wasn't much of a flood current because of the snow melt, but I think things are returning to Normal.

We stopped at Liberty State Park for a short rest, and had a fast trip home on the wind.

Truth: It's always better to be early.
Posted by Tim Gamble at 9:52 PM No comments: 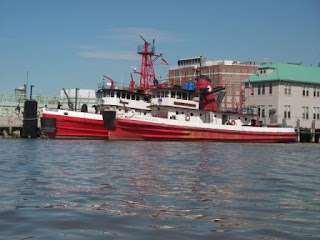 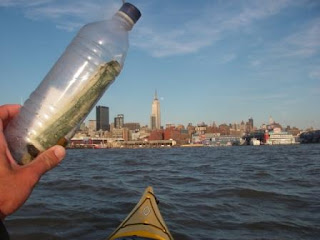 I released this message in the New York Harbor.

We paddled down the river to see the new Golf Course South of Liberty State Park. Seems like they built a nature walk and cleaned-up the beach here. My hopes of sneaking onto the course for a quick game later in the summer were dashed by a giant steel fence. The course looks like a prison.

It was a nice warm spring day, and the tides were very strong because of the snow melt. In the pictures you can see the Empire State Building, and the moon.

Because of the snow melt tides we got to play in a small tide race for about 10 minutes in front of Pier 63.

We checked-out the new pier 66 facility, and the waterwheel.

The barge is about to be moved, and they were making final preparations for the moving.

Truth: You should always check the weather.
Posted by Tim Gamble at 8:31 AM 2 comments: